After Mysterio exposes Peter Parker as being Spider-Man, New York City is divided on whether they view him as a hero or a menace. Although Peter (Tom Holland) tries to continue living a normal life, MJ (Zendaya) and Ned (Jacob Batalon) are also affected with their college applications due to their association with Peter. He goes to Doctor Strange (Benedict Cumberbatch) to try and cast a spell for people to forget that he is Spider-Man, but Peter’s tampering with the spell causes a break in the multiverse that sends people from other universes that know Peter Parker is Spider-Man into this one. This includes past Spidey enemies – Norman Osborn/Green Goblin, Otto Octavius/Doctor Octopus, Max Dillon/Electro, Flint Marko/Sandman, and Curt Connors/The Lizard.

When Peter learns that the villains are fated to die fighting Spider-Man in their worlds, he tries to stop Strange from sending them back and traps Strange in the Mirror Dimension. Peter tries to come up with cures for the villains to be rid of their corruptions so they can go home and not suffer tragic ends. While it works for Doc Ock, the Goblin persona takes over Norman and stops himself from getting cured, also convincing Max and Flint to not go through with it. Aunt May is killed trying to help Peter fight Goblin, and Peter blames himself for her death.

MJ and Ned use Strange’s portal creator to summon the other two Peter Parkers from the villains’ homeworlds to help their Peter get back on his feet and find a solution. Together, they create the cures and face off the villains on the Statue of Liberty. Otto comes to help as well, and Max, Flint, and Curt all turn back to normal. Goblin fights Peter and is nearly killed by him, but the Peter from Goblin’s universe stops him, and they help cure Norman. As an even bigger multiversal rift happens, Peter tells Strange to cast a spell that will make everyone in every universe forget that Peter Parker is Spider-Man, which will mean that it will be like Peter never existed. He says goodbye to MJ and Ned, as they will not have any memory of him, and everyone is sent back to their own universe.

Peter continues to keep an eye on his loved ones while continuing his duties as Spider-Man. Meanwhile, Eddie Brock and Venom (who were sent thereafter “Venom: Let There Be Carnage”) are pulled back to their own universe after the spell works, but a small piece of the symbiote remains. 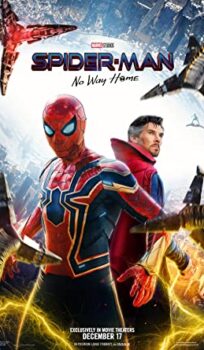