Sterling and Walter get to H.T.U.V.’s data vault in Venice to keep Killian from taking the database containing the information on all of the agency’s employees, but before they can go in, Walter finds himself confronted by Marcy, Eyes, Ears, and a slew of other Internal Affairs agents. Sterling uses his pigeon form to blend in with a flock of other pigeons standing around. Marcy tries to persuade Walter to give up Sterling, bringing up his police officer mother and how she died on duty, and even promises to help him get his job back as well as give him a new lab and all the equipment he needs in order to show H.T.U.V. how good his inventions are. Walter refuses to tell her where Sterling is, saying that they should all be working together. As she is about to cuff him, an explosion rips through the top floors of the data vault. Marcy cuffs Walter and goes in with the agents, but Sterling gets the cuffs off and he and Walter follow them.

The duo find the I.A. agents taking on an M9 Assassin drone that has a tablet containing the database in its grasp, and the I.A. squad get overwhelmed and caged up in some debris while the drone escapes to the roof. Sterling and Walter give chase, but the drone is faster than they are, so Walter throws Sterling off the roof to get him to fly after it since pigeons are fast fliers. Unfortunately, he still hasn’t gotten the hang of flying, so he gets helped along by Walter’s pet pigeon Lovey as well as Jeff and Crazy Eyes, two wild pigeons that buddied up to Sterling. The pigeons gain possession of the tablet and play keep-away with the drone until Walter drives up below them on a commandeered scooter and makes the final catch, and the drone crashes into a canal. However, when the protagonists reach the Piazza San Marco moments later, Killian clotheslines Walter off the scooter, then regains the tablet and gets Walter under his foot. Walter calls out to Sterling for help, and Killian taunts Sterling to get him to come out and face him, during which we see Sterling emerge from the crashed scooter with his foot tangled in some wires. Just as Killian is about to kill Walter, Sterling yells out Walter’s name, distracting Killian and enabling Walter to throw some breadcrumbs onto Killian to attract the hundreds of pigeons in the piazza. The birds fly all around Killian, enabling Sterling, Walter, and their pigeon pals to get away, and Killian soon finds himself held up from behind by Marcy, Eyes, and Ears. He puts on his Sterling disguise and flees on another drone using his bionic arm, and his arm does not go unnoticed by the three agents and causes Marcy to doubt her suspicions about Sterling.

Sterling, Walter, and their pigeon friends (plus some Venetian pigeons that came with them) escape to the sea via the submarine from Sterling’s yacht, and Walter reveals that he was able to place a tracking device on Killian while the pigeons were swarming him. When Sterling tells Walter he couldn’t have done this without him, Walter hugs him, and he squeezes him hard enough to cause him to suddenly lay an egg. Walter realizes there that, since he used Lovey’s DNA for the transformation serum, he has turned Sterling into a female pigeon, so he perfects the serum’s antidote with this knowledge and Sterling drinks it, turning him back into a human. Moments later, they arrive at H.T.U.V.’s covert weapons facility located on an island in the North Sea, which Killian has taken over, but Sterling tranquilizes Walter and sends him back out to sea in the submarine before going in to face Killian, refusing to see any harm come to him.

Sterling sneaks his way into the facility and confronts Killian in his office after destroying another one of his drones, but Killian plugs the stolen database into a nearby computer and uploads all of the profiles of H.T.U.V.’s staff into the 1,000+ more drones that he has, all of which appear behind Sterling. One of them then knocks him out with an electrical shock. When Sterling comes to, he finds himself bound to a chair, and Killian soon reveals to him that the left side of his face is also bionic. He explains that he is seeking revenge against Sterling and H.T.U.V. because, while in Kyrgyzstan with his crew years ago, they all came under attack from Sterling and the agency, and he was the only one who survived. He was left badly disfigured, however, so he replaced his lost and damaged body parts with the bionic implants. Feeling like Sterling and H.T.U.V. took everything from him, Killian had all the drones created and uploaded the database into them because he plans to send the drones out to the agency’s headquarters in Washington D.C. and kill everyone who works there. However, he will let Sterling live so he can understand what the kind of loss he experienced feels like, though in a harsher context.

Killian then launches the drones, but moments later, the facility’s proximity alarm goes off, and Killian and Sterling discover over the computer that Walter’s submarine is returning to the island. After Sterling says to himself that Walter must be coming back for him (though Walter is actually just starting to wake up), Killian sends out two of the many remaining drones towards the sub and blows it up while forcing Sterling to watch, then tells Sterling that he is taking everything from him before leaving the room. Later, Walter and the pigeons show up to free Sterling, and Walter shows him that he survived the blast using his “Inflatable Hug”, a blow-up sphere that encases and protects its user from anything dangerous. Walter tells Sterling that he will always have his back because that is what it means to be a team, and Sterling replies that he is a good friend. Walter then asks what his plan is to stop Killian, and Sterling answers that they will do it his way this time and use his offbeat gadgets to halt the villain. Walter then decides to contact Marcy to get her and her agents’ help for the coming confrontation.

Sterling and Walter head upstairs to the ruins of the facility’s façade building, and Sterling confronts Killian and his drones while Walter hides from view and starts hacking into Killian’s bionic arm so he can gain control over it and shut down all the drones. Sterling, the pigeons, and Marcy and her agents then launch their combined attack on Killian and the drones using Walter’s nonlethal weapons, and Marcy also takes a moment to apologize to Sterling for misjudging him. Meanwhile, the 1,000+ drones Killian sent to D.C. are seen arriving outside H.T.U.V.’s headquarters, and they send out a pulse that powers down the entire place before they start breaking into it. Sterling and the others are successful in wiping out the bulk of the drones they’re fighting, but Killian strikes Crazy Eyes, causing Walter’s multi-pen – which is still stuck in his gut – to spray a lot of truth serum out of his beak and send him flying all over the place. This serum gets all over Killian, Sterling, and Marcy as the latter two are trying to prevent Killian from using a gun he has taken from a wrecked drone, and Crazy Eyes soon slams into a wall and coughs up the pen. Sterling and Marcy continue to grapple with Killian until his gun suddenly goes off and exposes Walter’s hiding place, and under the truth serum’s influence, Sterling tells Killian that Walter is hacking into his arm in order to turn the drones off. Killian throws Sterling and Marcy off him and halts Walter’s efforts before attempting to fly away on another drone, but Walter picks up his multi-pen and uses the “Serious String” (a pink, gummy substance) in it to grab hold of Killian’s leg and stop him. However, Killian proves to be too strong for him, and Walter starts to get pulled skyward. Sterling tries to prevent it, but only succeeds in pulling off Walter’s backpack, which contains his mobile lab and another sample of the transformation serum, and Lovey lands next to it and one of her feathers falls out.

Killian uses the Serious String to pull Walter up to him just as Walter finishes hacking into his arm, and Killian tells him that, if he hits the “Yes” button to activate the shutdown, they will both fall to their deaths. Walter responds by trapping him in the Inflatable Hug, leaving his claw hand free but unable to do anything, and he presses the button as he begins to plummet towards the ground, just in time to stop all of the drones in D.C. from killing even one H.T.U.V. employee. As Walter continues to fall, Sterling flies up in his pigeon form to rescue him, having drank the serum again and having finally learned how to fly. He grabs hold of Walter, and then Lovey, Jeff, Crazy Eyes, and the Venetian pigeons fly up and grab Walter as well, and their combined wing flapping greatly slows Walter’s descent. Sterling and Walter land roughly on the grass but are largely unharmed. Eyes, Ears, and a bunch of other agents find Killian alive, floating in the water in the Inflatable Hug, and they place him under arrest (though not before Eyes remarks with surprise that Walter actually saved him, something that even surprises Killian a little). Marcy finds Sterling and Walter and laughs over Sterling’s pigeon form.

Despite having saved the world, Sterling – back in his human form – and Walter are fired from H.T.U.V. over multiple violations on both their parts, but Sterling tells Walter that his mother would be proud of him right now, for his methods have kept a lot of people safe. However, they are then suddenly blindfolded and thrown into a van, and when they get their blindfolds removed, they discover that Marcy was the one who kidnapped them. Director Jenkins then appears on a video screen and essentially tells them both that they are rehired, then tells Walter that he is the future of H.T.U.V. and they need people like him who can help the agency do things in a new way, and she wants him to lead a new team with Sterling on it. The film closes with Sterling and Walter on a mission together and using Walter’s inventions to save the day. 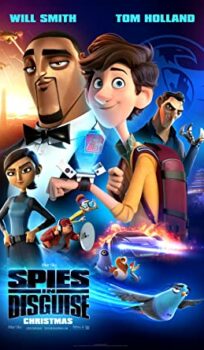