SHORT VERSION: Henry, Kitty, and Lucinda eventually find out that Tommy is the Bournemouth Baby, and by the end of the movie, he ascends to the ducal throne of Bournemouth.

The four of them succeed in stopping Shadgrind, and he flees England. Though they never see him again, they did hear rumors that he ran off to Beverly Hills and became a film producer.

Henry forgave Tommy for everything, and they became firm friends.

Tommy sells his story over becoming the Duke to the tabloids, and marries his secretary Angela so she won’t sell her story of how he sexually harassed her back when they used to work at the stockbroking firm.

Henry and Kitty help Tommy establish the Hall of Saddlers (the ducal estate) as a major tourist attraction, with Henry creating his own tour service for the place.

Tommy closes the film by saying “And so, we all lived happily ever after – well, for a bit, at least.”

LONG VERSION:
After several attempts to kill Henry (Rick Moranis) fail, Tommy (Eric Idle) decides to give up after a near-successful attempt because he realizes that he values Henry and Kitty (Catherine Zeta-Jones) as friends. However, the same night that he gives up, the body of the cook Mrs. Bullock (Brenda Bruce) (who is Henry’s real mother) is found in the freezer. A few days later, Kitty tells Tommy that she is pregnant with his son (who ends up being named Tommy), so he’ll become the future Duke of Bournemouth.

However, things get ugly when, during a party at the Hall of Saddlers (the ducal estate) to celebrate the birth of Little Tommy, the baby’s nanny gets killed in an assassination attempt meant for him, which brings about an investigation by the Metropolitan Police. Shadgrind (John Cleese) – who has come to believe that he is Tommy’s partner in crime – then pops up at the funeral and tells Tommy that he is building up “their case” that will prove Tommy’s status as the true Bournemouth heir.

One day, Tommy brings the silver rattle (which proves his status as the Bournemouth Baby) into the baby’s room to entertain Little Tommy, and Lucinda (Barbara Hershey) comes in to try to hit on him again. However, when she sees the rattle, she realizes that he is her long-lost son. Henry and Kitty overhear this revelation on the baby monitor, and they also overhear Tommy telling Lucinda that Henry is Mrs. Bullock’s son, and that Little Tommy is his son and not Henry’s since he and Kitty had a brief fling before she wed Henry. Hurt by Kitty’s unfaithfulness, Henry leaves the estate in one of the antique cars to clear his head, unaware that Shadgrind – posing as a mechanic – has placed a bomb in it so he will get killed. Kitty enters the baby’s room and informs Tommy that Henry has heard everything, so he immediately goes after him. He encounters Shadgrind outside, who confesses to killing Mrs. Bullock and attempting to assassinate Little Tommy, and that he has now set up Henry to be killed. He explains to Tommy that he did all of this so he will have a clear path to inherit the ducal throne. Tommy heads off after Henry in another car.

Henry and then Tommy run afoul of a car driven by a couple of rude French cyclists, but Tommy gets even with them by making them crash into a construction zone, flipping their car over onto its hood. However, they are spared from injury because their upside-down bicycles are on the hood, so the car now rides upside down on them. Tommy soon finds Henry’s car, but then he watches with horror as it explodes.

Back at Saddlers that night, Kitty admits to Tommy that Little Tommy is really Henry’s son, and she only said the baby was his because she thought he was going to murder Henry and was desperate to stop him. Just then, Shadgrind shows up with a shotgun and tells Kitty that he killed Henry, and then says that he now intends to kill them both (having finally understood that Tommy never ever wanted a partnership with him) and make their deaths look like a suicide pact, and he has already made himself the baby’s legal guardian so he can leech off of the wealth and estate until the baby comes of age. Moments later, Henry shows up with a rifle, and he forces the shocked Shadgrind to drop his gun. He explains that he survived the explosion because, when he had temporarily pulled over to urinate, some random guy stole the car from him, so the random guy died in his place. However, Henry makes a clumsy shot with the rifle and ends up getting pinned beneath a moose head. The commotion enables Shadgrind to retrieve his gun, but before he can use it, Lucinda appears on the balcony above him and drops a puma statue on his head, knocking him senseless. As Tommy and Kitty help Henry up, Shadgrind regains his senses and gets out of the house, but he encounters one of the estate’s pumas outside. Just as the puma lunges at him, the French cyclists – still in their upside-down car – randomly show up and run it over, and Shadgrind makes his escape by riding on the underside of the car.

Tommy – now the official Duke of Bournemouth – narrates that that was the last they ever saw of Shadgrind, though they had heard rumors that he ran off to Beverly Hills and became a film producer. Tommy also says that Henry forgave him for everything, and they became firm friends. He sold his story to the tabloids, and married his secretary Angela (Sadie Frost) so she wouldn’t sell her story of how he sexually harassed her back when they used to work at the stockbroking firm. Lucinda entered into a romantic relationship with the detective who headed the investigation into the nanny’s murder. Kitty and Henry helped him establish Saddlers as a major tourist attraction, with Henry creating his own tour service for the place. He lastly closes the film by saying “And so, we all lived happily ever after – well, for a bit, at least.” 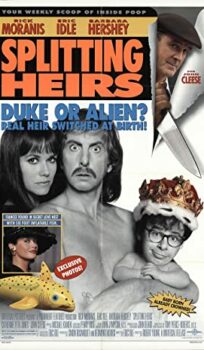