Pooper:
All the girls eventually go home one by one for different reasons. They are never caught for robbing the fast-food restaurant or any of the crimes they commit with Alien. Alien is killed during the hit on his rival Archie.

Long Version:
Candy (Vanessa Hudgens), Brit (Ashley Benson), and Cotty (Rachel Korine) are bored college party girls who rob a fast-foot restaurant to pay for a spring break getaway. They take their more conservative friend Faith (Selena Gomez) with them. They have a great time and never want to leave, but eventually party too hard and wind up getting arrested for possession and other misdemeanors (not robbing the fast-food restaurant, which they are never actually caught for). They are bailed out by a local rapper and gangster called Alien (James Franco). Faith is creeped out by him and his motives for bailing them out and decides to go home, and her friends see her off but decide to stay.

Candy, Brit, and Cotty start getting involved with Alien’s illegal activities and rob many places and people with him. They also get involved in his turf war with a rival gangster named Archie, and after Cotty is shot in the arm during a drive-by she decides to go home as well. Candy and Brit stay with Alien and start a three-way relationship with him, and encourage him to take Archie out for good. On the night they decide to make the hit, Alien is killed as soon as they arrive but the girls carry out the mission and kill every person in Archie’s crew as well as Archie. The film ends with the girls taking Alien’s car and driving away, it is implied that they are going home as they had called their families the night before and told them how they want to come home and be better people. 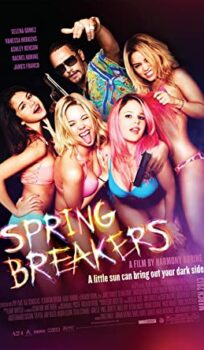