OSS Director Danger D’Amo (Jeremy Piven) is really the Timekeeper. He’s been tinkering with time and space all this time in a vain effort to return to the past.

In the 1930s, D’Amo’s father was a scientist working on the problem of time travel. During a lab mishap, young D’Amo was trapped in time for decades. By the times he was freed, his father had grown old and died. D’Amo wants nothing more than to go back in time and re-live his childhood with his father.

Cecil (Mason Cook) figures out that D’Amo has ALREADY tried to do this dozens of times, and has always failed. All of the Timekeepers’ cronies, including Tick Tock, are just new versions of Danger D’Amo himself. Every time D’Amo has gone back int time and tried to change things, his father has still died, but a new alternate D’Amo has been created.

Cecil and Rebecca (Rowan Blanchard) melt D’Amo’s heart and make him see that it’s impossible to change the past. But Tick Tock and the dozens of “others” D’Amos are still evil and still want to go back in time.

Cecil and Rebecca’s Dad, Wilbur WIlson (Joel McHale), save the day, handcuffing Tick Tock and beating up all the pseudo-D’Amos. Tick Tock tries to run away, but is tripped up by Marissa, the baby. 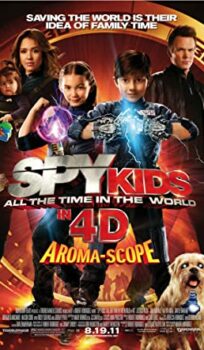