Pooper:
Cooper and Artingstall save the day, kill De Luca, and arrest Rayna. They are now respected by their fellow field agents and permitted to continue working in the field. Cooper ends up sleeping with Ford.

Long Ending:
This action-comedy opens with CIA superspy Bradley Fine (Jude Law) infiltrating a villain’s lair. He is assisted remotely by fellow agent Susan Cooper (Melissa McCarthy), who follows the action through an eye and earpiece and utilizing heat vision. With Cooper’s help, agent Fine successfully completes the mission. Though Fine seems to genuinely like Cooper, he clearly takes advantage of her adoration for him by having her handle many menial personal tasks. Cooper and her fellow remote agents are generally looked down upon by the field agents and work in a shabby, vermin-infested headquarters. Meanwhile, field agents like Fine, Karen Walker (Morena Baccarin) and Rick Ford (Jason Statham) live a swanky lifestyle.

On one mission, Fine is sent to infiltrate the home of the villainous Rayna Boyanov (Rose Byrne), who is rumored to be selling a nuclear weapon to terrorists. Fine is immediately discovered and killed by Rayna. During the killing, Rayna talks directly to the remote agent (Cooper), telling her she has the names and identities of all field agents and will kill any others that try to stop her. Ultimately, Cooper convinces the head of the CIA Elaine Crocker (Allison Janney) to let her enter the field as Boyanov does not know the identity of any remote agents. Ford resigns in protest, saying that Cooper will fail her mission and the world will be lost. Cooper is excited to receive her new alias and spy tools until she learns that her alias is as an old grandmotherly cat-lady and the tools are disguised as various embarrassing toiletries (such as laxatives and hemorrhoid wipes).

Although she is initially overwhelmed by the danger in the life of a field agent (and passes out after she kills her first enemy), she soon manages to infiltrate Rayna’s inner-circle (convincing Rayna that her now-deceased father hired her to act as her bodyguard). Cooper becomes increasingly more competent, saving Ford’s life a number of times (Ford has gone rogue to take Rayna down and despite talking a big game, is in fact, quite hapless). She also has to fend off the lascivious flirtations of Italian agent Aldo (Peter Serafinowicz). Cooper eventually learns that it was Agent Walker that sold the names and identities of the CIA agents to Rayna. Walker almost kills Cooper, but is fatally shot by a mysterious sniper before she can take Cooper down. Cooper’s good friend and fellow-remote agent Nancy Artingstall (Miranda Hart) is also sent into the field to assist Cooper (although Artingstall proves far less competent).

During a fight with an assassin in a club (that also involves Artingstall trying to kiss 50 Cent (himself)), Cooper blows her cover. She and Aldo are taken captive by Rayna and her accomplice… Bradley Fine (who faked his death and is sleeping with Rayna). Fine secretly tells Cooper he is undercover and is the one who saved her from Walker. After a pep talk from Aldo (who was also captured), Cooper escapes and follows Rayna and Fine to the site of the sale of the nuclear weapon. Rayna is double-crossed by another one of her accomplices named De Luca (Bobby Cannavale) who steals the nuke and the money. With some bumbling assistance from Ford and the help of Fine and Rayna, cooper manages to jump on De Luca’s helicopter and ultimately throw the nuclear weapon out of the helicopter and into a lake. De Luca is shot by Artingstall (who has commandeered 50 Cent’s helicopter) before he can shoot Cooper.

In the end, Cooper and Artingstall are commended by Elaine and elevated to permanent field agent status. Rayna (now in custody) admits a slight liking for Cooper. Ford begrudgingly praises Cooper before taking a boat to Italy (not realizing that he is sailing in a lake, not the ocean). Cooper then turns down romantic offers from both Aldo and Fine so that she can celebrate with Artingstall. We jump to the next morning where Cooper wakes up in bed next to Ford, much to her chagrin. We also find out Ford is very into cuddling. 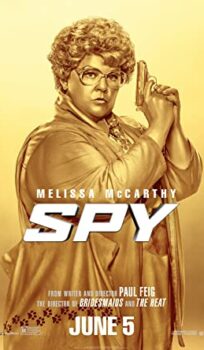