Nine travelers are on a dangerous stagecoach ride through hostile territory, with Geronimo and his warriors on the warpath.  They include a drunken doctor, Mrs Mallory- the wife of an army officer, Dallas- a tavern girl run out of town by the decent women of the town, the sheriff, a banker running off with all the deposit money from his bank, and the Ringo Kid (John Wayne).  Ringo has escaped from jail to get revenge on the Plummer brothers who murdered his father and brother.

Along the way, Mrs Mallory goes into labor (she had been hiding the pregnancy so they would let her travel to join her husband).  Delivering this baby produces a change in the drunken doctor.  Ringo and Dallas fall in love and he asks her to marry him.  The stagecoach is attacked, and the sheriff frees Ringo to help fight.  Ringo shows skill and courage in fighting off the attack and controlling the frantic horses.

When they get to Lordsburg, the sheriff lets Ringo go, believing he has earned the right to confront the men who murdered his family.  The banker is caught and arrestedThe doctor enters the saloon and takes away Luke Plummer’s shotgun.  The Plummer brothers and Ringo face off, and Ringo shoots and kills all three.  The sheriff shows up in a wagon to arrest Ringo.  The sheriff has Dallas get in the wagon with Ringo, and then whips the horses, letting Ringo and Dallas “escape” to a new life together. 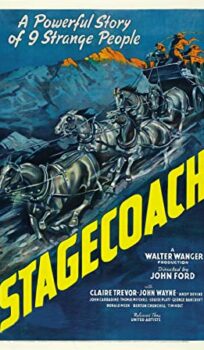