Chris (Richard Dreyfuss) starts to complicate the whole stakeout operation on Maria (Madeleine Stowe) – as well as his own job – when he falls mutually in love with her (though she knows him as Bill), and one night, they end up having sex. The following day, while Montgomery (Aidan Quinn) and his cousin Caylor (Ian Tracey) are still making their way to Seattle by car, they get the attention of a passing police car since they are wanted for robbing a gas station two days ago and killing the clerk. They initiate a high-speed chase with the cops and have a shootout with them as they go, but Caylor eventually gets mortally wounded by one of the cops’ shots. The two men then find themselves facing a police blockade on a bridge over the Nisqually River, but they escape it and continue fleeing down along the riverbank until Montgomery sends the car into the river. Montgomery leaves Caylor to perish in the sinking vehicle and is able to get out of the river and away from the area without being seen by the police.

That night, when Chris shows up at the abandoned apartment across from Maria’s apartment to do another all-night stakeout there, he finds Bill (Emilio Estevez) packing everything up, and Bill tells him that their job is finished because he received word that Montgomery had perished in the Nisqually River earlier today. He then asks Chris what he plans to do about Maria, and Chris admits that he loves her and has decided to come clean with her about who he really is. He enters her house as she is finding out about Montgomery’s apparent demise on the TV news, and after telling her that he loves her, he shows her his detective badge and confesses his true identity to her as well as what he has been doing and where he has been doing it from. Upset, she storms over to the abandoned apartment and enters it to see Bill still packing up the gear, and after getting a good look at all of the things that the cops used for the stakeout, she angrily leaves. Chris follows her out, stops her, and tells her that, while he was only doing his job, his feelings for her are genuine, but she just throws his badge on the ground and heads back up to her apartment.

When she arrives there, she is surprised by Montgomery. Soon after, Chris comes up to try to explain himself some more, but Montgomery meets him at gunpoint. Bill walks outside and sees what is going on inside Maria’s place, so he grabs his gun and climbs up the exterior of her house to find a way to assist Chris. When Montgomery questions Chris about who he is, Chris lies and basically explains that he is a former bank robber out on parole, and he has violated that parole recently. During his explanation, Montgomery has Maria get a knife for him, and he uses it to cut open the back of one of her living room chairs and pull out some stacks of money that he had secretly stashed in it before got put behind bars. He soon gets on the phone and calls up a guy, and he tells him that, wherever they are going to do this, they have to do it now. After the guy gives him some instructions on where to meet him, Montgomery tells him that he will be there in 20 minutes, then tells Maria to pack her bags because they are taking a trip. By this point, Bill has made it up to the kitchen window, but before he can fire a shot at Montgomery, a resident in the house next to Maria’s turns a light on that illuminates him. Though he tries to duck out of sight, Montgomery sees him, and he soon orders Chris to go outside and check around the property out back. While Montgomery looks around the front and Chris searches along one of the sides, Bill drops down in front of Chris, but Chris suddenly decides to knock him out in order to maintain his criminal façade. Montgomery comes around and sees the unconscious Bill, and after taking his handgun, he has Chris bring him inside. Montgomery finds Bill’
s badge and takes his handcuffs, and after Bill regains consciousness, Montgomery demands to know how he knew he was here. When Bill doesn’t answer, Montgomery prepares to kill him, but Chris stops him by telling him that Bill has been following HIM for the aforementioned parole violation. He then tells Montgomery that he has a car outside and can take him wherever he needs to go, so Montgomery has him cuff Bill’s hands behind his back before they all get in the car and drive off. As they are driving along, Montgomery tells Maria that he is leaving the country and she will be coming with him.

The group arrives at a paper mill by a river and they walk down to its dock, and Chris and Bill are forced to sit together while a boat is seen making its way towards them all. Montgomery tells Maria to go take a walk for five minutes, claiming that he has to have a chat with the boat’s driver, but Maria tells him that she knows that he really intends to kill Chris and Bill and asks if he really expects her to go with him after he murders them. As they argue about it, Chris slips Bill the keys to his cuffs, but then they notice that the boat’s driver is B.C. (J.J. Makaro), the same crook that they tried to arrest earlier in the film before they did the stakeout, meaning that their act will be ruined if he sees them. Montgomery then forces Maria aside and tries to shoot the duo, but Maria stops him and slaps him, and he backhands her to the ground in response. B.C. hops down to the boat’s deck and informs Montgomery that Chris is a cop, but Bill gets his hands free and hits Montgomery with a surprise punch before he can do anything, and then Chris fights Montgomery while Bill leaps onto the boat and fights B.C. Though Chris makes Montgomery lose his handgun in the river, Montgomery overpowers him and throws him into the water, then takes out Bill’s handgun and fires a couple of shots at him as he swims under the dock, but the bullets miss him. B.C. sticks a boat hook into Bill’s right shoulder and uses it to hurl him into the drink, then takes off with the boat without letting Montgomery get on, unaware that Bill is hanging on to one of the fenders. Chris climbs out on shore a short distance from Montgomery and Maria, and the desperate Montgomery forces Maria up towards the paper mill.

Bill climbs back aboard the boat and dukes it out with B.C. until the boat crashes into a logging boom, and the impact makes B.C. fall off the boat and land on the logs. He soon slips in between two of them and goes into the water, then drowns when they close back up on him. Meanwhile, Chris hurries up to his car and gets his gun out of the glove compartment, but Montgomery then appears with Maria and takes another shot at him. That bullet also misses, and when Chris aims his gun at Montgomery, he tries to hold Maria hostage. Maria breaks free by elbowing him in the gut, and then she gets out of the way as Chris returns fire, and Montgomery retreats into the mill with Chris giving chase. After Chris tries and fails to shoot Montgomery a few times, Montgomery enters a control room and turns on all of the machines, and Chris winds up losing his gun in one of them. Chris soon ambushes Montgomery and makes him drop his gun, which falls to the floor below them, and they have a brawl that goes down to that same floor. They soon fight to gain possession of the weapon, and this results in Chris getting his arm stuck underneath a log on a conveyor belt. Montgomery reclaims his gun, but before he can kill Chris, Maria appears and hits him in the back of the head with a wooden board, causing him to drop the gun again. As Montgomery is distracted with wresting the board from her grasp, Chris manages to get his arm free, and when Montgomery goes to hit him with the board, he picks up Montgomery’s gun and shoots him in the heart, killing him.

At the break of dawn, the police and the paramedics are on the scene, and the cops bag up Montgomery’s body while Bill is brought back to shore and loaded into an ambulance. Chris chats with Maria and remarks that she saved his life, and she replies that this means that he belongs to her now. They then have a passionate kiss and tell each other that they love each other before Chris puts her in his car so he can take her back home. 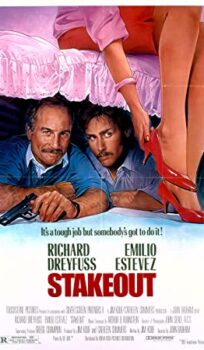