John Harrison (Benedict Cumberbatch) initiates a suicide bomb attack on Starfleet Archives in London, which is really Section 31. At an emergency meeting, the heads of Starfleet convene but are attacked by Harrison. Pike is killed and Kirk is reinstated and granted permission to launch a covert mission to kill Harrison who is on Kronos, the Klingon homeworld. Admiral Marcus (Peter Weller) gives Kirk 72 untraceable missiles. Marcus’ daughter forges papers to join the crew. Scotty (Simon Pegg) objects and is dismissed by Kirk.

The mission falters when the Enterprise’s warp core fails in the Neutral Zone so Kirk, Spock (Zachary Quinto) and Uhura (Zoe Saldana) take a shuttle. Just as the Klingons are about to kill them, Harrison appears and takes out most of them on his own. He surrenders to Kirk after learning about the missiles. The Enterprise contact Admiral Marcus to let him know they are bringing Harrison to trial.

Kirk questions Harrison, and finds out he is in fact Khan Noonian Singh, a 300 year old superhuman. The 72 missiles are in fact his crew in cryogenic stasis. Marcus revived Khan to fight the Klingons.

Marcus appears in a starship (USS Vengeance, a warship commisioned by the Admiral) three times the size of Enterprise. It was Marcus who disabled the warp core of the Enterprise. He finds out Kirk knows everything about Khan and fires on the Enterprise. Just before they are destroyed, a stowaway Scotty disables the ship.

Kirk bargains with Khan to stop Marcus.  But he betrays them just as they get to the Dauntless’ bridge. He kills Marcus and bargains Kirk, Scotty and Carol Marcus’ live in exchange for the missiles. Spock complies, but knowing what Khan would do(after talking to original Spock), detonates the missiles but without the bodies inside. It disables the ship but doesn’t destroy it.

The Enterprise loses power and freefalls. In a homage to Star Trek 2, this time Kirk realigns the power core to start the warp core to stabilise the ship but he dies from radiation poisoning.

Khan on board the Dauntless tries crash the ship into Starfleet HQ. He and Spock fight and is eventually subdued by Uhura’s phaser.

Kirk is revived with Khan’s superblood after it was tested by McCoy on a dead Tribble.

The film ends with the Enterprise about to begin its five year mission. 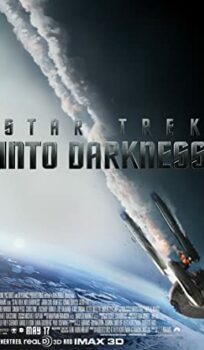