The Romulan Nero (Eric Bana) is exacting revenge for the destruction of his home planet Romulus, for which he blames Ambassador Spock (Leonard Nimoy).

A star in the vicinity of Romulus was predicted to go supernova. Ambassador Spock promised to neutralize the star with “red matter”, a substance that would have collapsed the star directly into a black hole without it going through the supernova phase. Ambassador Spock was on his way to Romulus in a ship containing a sphere of the red matter when the star unexpectedly went supernova. Nero and his crew were onboard a planetary mining ship near Romulus and both Nero’s ship and Ambassador Spock’s ship were sucked through the resulting black hole and deposited in the past.

Nero’s ship emerges from the black hole 120 years earlier and immediately attacks and cripples the U.S.S. Kelvin. First Officer George Kirk (Chris Hemsworth), in command because the Kelvin’s captain is killed by Nero, is able to evacuate the Kelvin’s crew including his own wife (who is just giving birth to their son James Kirk) before crashing the Kelvin into Nero’s ship. Jim Kirk (Chris Pine) grows up to be a brilliant delinquent who is prodded by Captain Pike (Bruce Greenwood) to join Starfleet after he sees Kirk get beat up in an Iowa bar by other Starfleet cadets for hitting on Uhura (Zoe Saldana).

Three years later at Starfleet Academy, cadet Kirk reprograms the Kobyashi Maru simulation, which Commander Spock (Zachary Quinto) designed to test cadets’ reactions in the face of certain death. At about the same time, Ambassador Spock’s ship emerges from the black hole and is captured by Nero. Kirk is put on academic suspension, but his friend Dr. “Bones” McCoy (Karl Urban) helps him get aboard the U.S.S. Enterprise when it and several other starships are asked to respond to distress calls from the planet Vulcan.

Nero destroys all the Starfleet vessels which answer the distress call except the Enterprise and uses a drop of the red matter and his planetary mining drill to destroy the planet Vulcan (despite an attempt by Kirk, Sulu and an ill-fated demolition expert in a red suit to sabotage the drill). Commander Spock, in command because Captain Pike surrenders to Nero in an attempt to save the Enterprise, manages to transport Sarek (Ben Cross) and a few other Vulcan elders on board but the ground gives way under his mother Amanda (Winona Ryder) before she can be transported and she is killed along with six billion Vulcans. About 10,000 Vulcans manage to escape in shuttlecraft.

Kirk argues with Commander Spock to follow Nero, who has now set a course for Earth, but Commander Spock chooses to regroup with the remaining Starfleet. Commander Spock exiles Kirk to Delta Vega for insubordination, where Kirk finds Ambassador Spock, who was marooned there by Nero to helplessly watch the destruction of Vulcan and Montgomery Scott (Simon Pegg), who is the caretaker of a small outpost.

The transwarp beaming works. Kirk provokes Commander Spock into an emotional outburst, Commander Spock relinquishes command and Kirk takes the center seat. On advice from Chekov (Anton Yelchin), the Enterprise warps in behind Saturn, so as to not be detected by Nero and Kirk and Commander Spock beam aboard Nero’s ship (after Commander Spock gets a long kiss goodbye from Uhura) as it attacks Earth. Kirk rescues Pike, Commander Spock takes Ambassador Spock’s ship containing the remaining red matter, disables the drill and lures Nero’s ship away from Earth.

Commander Spock puts Ambassador’s Spock’s ship on a collision course with Nero’s ship and the Enterprise phasers clear a path so that Ambassador Spock’s ship can crash into Nero’s ship. Scott beams Commander Spock, Pike and Kirk aboard in the nick of time and the release of the red matter creates a black hole that starts to suck Nero’s ship to its doom. Kirk offers to beam Nero and his surviving crew aboard the Enterprise, but Nero refuses and Kirk hastens his demise with a phaser and photon torpedo barrage. Quick work by Scott prevents the Enterprise from being sucked into the black hole as well.

Kirk is awarded command of the Enterprise, which he takes over from the wheelchair-bound Admiral Pike. Ambassador Spock meets Commander Spock and encourages Commander Spock to remain with Starfleet, serve aboard the Enterprise and forge a new destiny with the newly-minted Captain Kirk. Leonard Nimoy’s narration of “Space, The Final Frontier…” monologue closes the film as the Enterprise, manned by all of the characters we know and love goes into warp drive. 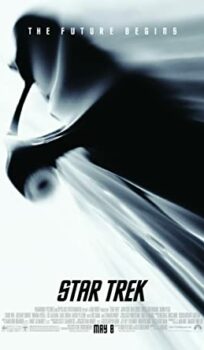