Submitted by Curt, the Grand Poop-bah

What are you looking here for? If you’ve seen the other five films, you already know the bottom line:

Anakin Skywalker (Hayden Christensen) surrenders to the Dark Side of The Force, becoming the apprentice to the Sith Lord Palpatine (aka Darth Sidious) (Ian McDiarmid), and receiving the name ‘Darth Vader.’ The two of them and the Clone army exterminate all of the Jedi except Obi-Wan Kenobi (Ewan McGregor) and Yoda (voice of Frank Oz). Palpatine declares himself Emperor as a ‘security measure,’ claiming a Jedi attempt to overthrow the Republic. In a final confrontation between Obi-Wan and Darth Vader, Kenobi leaves his former apprentice mutilated and horribly burned. Thinking Anakin is dead, Obi-Wan brings Padmé (Natalie Portman) home, where she dies immediately after the twins Luke and Leia are born. Bail Organa (Jimmy Smits) takes the baby girl home with him to Alderaan, Obi-Wan takes the boy to Anakin’s step-brother Owen Lars on Tatooine, and Yoda goes into hiding on Degobah.

Oh, you came here for the tidbits that weren’t a complete given? Let’s see… 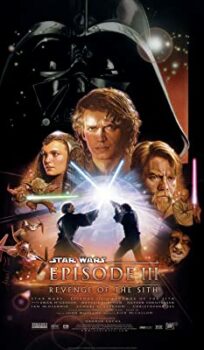