POOPER: (Thanks Curt)
Han (Harrison Ford) and Chewbacca (Peter Mayhew) abandon their “mercenary” facade and return to help the Rebels.
Han shoots one TIE fighter, which explodes and collides with Darth Vader’s, causing the Sith Lord to spin out of control.
Luke (Mark Hamill) then uses the Force to guide his release of a bomb into the Death Star’s central power shaft.
The most fearsome menace of the Empire thus destroyed, the Rebels celebrate with a big award ceremony.
Chewbacca, apparently the Tenzing Norgay of his galaxy, somehow doesn’t merit a medal.

A long time ago, in a galaxy far, far away – the evil Empire that rules the galaxy is embroiled in a battle with the Rebel Alliance that opposes them. A Rebel squad led by Princess Leia Organa (Carrie Fisher) has stolen the blueprints of the Empire’s new ultimate weapon called the Death Star. Leia’s starship is located and attacked by the Empire, led by the Emperor’s apprentice, a cyborg named Darth Vader (acted by David Prowse, voiced by James Earl Jones). Leia gives the Death Star plans to two robot “droids” – C-3PO (Anthony Daniels) and R2-D2 (Kenny Baker) – and tells them to find a man named Obi-Wan Kenobi (Alec Guinness) who can get the plans to the other Rebel leaders. The droids successfully escape the ship while Vader captures Leia.

The droids land on a nearby planet and are eventually purchased by the local Skywalker family, comprised of the orphaned Luke and his aunt and uncle. The droids eventually tell Luke (Mark Hamill) about their secret mission. Luke happens to know Obi-Wan (going by the name of “Ben”) and brings the droids to him. Obi-wan receives a message R2-D2 had for him from Leia and realizes that Luke and the droids are now in danger. When Luke returns home, he finds that Empire soldiers (called Storm Troopers) have already arrived and killed his family awhile searching for the droids. The droids, Luke, and Obi-Wan, realize they need to flee off the planet and deliver the Death Star plans to the Rebels before the Empire catches them. They hire a pair of smugglers – Han Solo (Harrison Ford) and an alien named Chewbacca “Chewie” (Peter Mayhew) – to smuggle them out. Han agrees to the job since he owes a lot of money to an alien gangster named Jabba the Hutt. The group escapes the planet and fly towards Leia’s home planet in hopes of delivering the Death Star plans to her allies there.

As they travel, Luke learns that Obi-Wan is a Jedi. The Jedi are a group of warriors that tap into an ethereal power source called the Force, which allows them to use telepathic and telekinetic powers and enhances their physical abilities. Most of the Jedi Order were killed when the Empire took over, and Obi-Wan is one of the few remaining Jedi. Obi-Wan reveals that he once trained Luke’s father to be a Jedi and can also train Luke. Although Han is skeptical that the Force even exists, Luke begins training with his father’s light saber (a laser sword).

When they arrive at Leia’s planet, they find the Empire there along with the Death Star weapon. The Death Star is a massive,e moon-sized warship that has a laser beam strong enough to destroy planets. Vader has brought Leia to the Death Star and threatens to destroy her homeworld unless she tells them all she knows about the Rebels. Leia refuses to capitulate and the Death Star’s General, Grand Moff Tarkin (Peter Cushing), has the Death Star destroy their planet. The Empire then notices Han’s ship (the Millenium Falcon) in the vicinity and use a tractor beam to force it aboard the Death Star.

Obi-Wan senses Vader and Leia aboard. He explains that Darth Vader (who, along with the Emperor, is a Dark Jedi called a Sith that uses the “Dark Side” of the Force) killed Luke’s father. The group manages to escape their ship once they are aboard the Death Star. They split up with Luke, Chewie, and Han off to rescue Leia, Obi-Wan to confront Vader, and the droids to the command center to deactivate the tractor beam. The droids and Luke’s group overcome various challenges to succeed at their mission and return to the Millenium Falcon. As Leia takes control of the escape plan, it’s clear both Han and Luke are attracted to her. The heroes prepare to take off, but Darth Vader and his forces approach. Obi-Wan emerges and confronts Darth Vader in a light saber duel. As the heroes escape, Darth Vader defeats and seemingly kills Obi-Wan (although Obi-Wan warns Vader that he will be stronger in death than he was in life).

The heroes arrive at the main Rebel base, unaware the Empire placed a tracker on the Millenium Falcon. The Rebels review the Death Star plans and find a duct that leads to the warship’s central reactor. If the Rebels can successfully fire a missile down the duct, it will destroy the reactor (which will set off a chain reaction that destroys the entire Death Star). Luke agrees to join the Rebels in their attack, but Han and Chewie decide not to stay and help. The Death Star arrives at the Rebel base, and Darth Vader leads the Empire’s attack ships against the Rebel forces.

Luke approaches the duct as the Death Star prepares to fire on the Rebel planet. Luke’s comrades are all taken out and Darth Vader closes in on his ship. Han and Chewie, having had a change of heart, return just in time to disable Vader’s ship (sending his ship spinning off into space) and destroying the other enemy pilots. Luke hears Obi-Wan’s voice telling him to use the Force. Luke taps into the Force and successfully launches a missile into the duct. The heroes fly off victoriously as the Death Star (and Grand Moff Tarkin) are destroyed. The film ends with the Rebels honoring Luke, Han, and Chewie for their service to the cause. 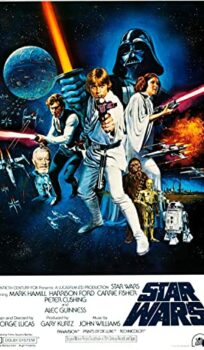