Washington Globe reporters Cal McAffrey (Russell Crowe) an Della Frye (Rachel McAdams) come to the conclusion that Point Corp, a Blackwater-esque private security contractor, is responsible for the murder for Sonia Baker (Maria Thayer), the mistress of Rep. Stephen Collins (Ben Affleck). They find out that Sonia Baker was planted on Collins’ staff as a spy for Point Corp, but had stopped cooperating after she fell in love with Collins. They conclude that Point Corp hired the ex-military man (Michael Berresse) who killed the drug addict at the beginning of the movie, and who pushed Sonia Baker in front of the train.

Collins makes these allegations on-the-record at the newspaper office, giving the reporters the quotes they need to run the story. As McAffrey asks Collins’ wife (Robin Wright Penn) why she’s staying with him, she says that he was set up, and mentions that Sonia Baker was being paid $26,000 a month to spy on him.

After realizing that there’s no way either Collins or his wife would have known that figure, McAffrey figures out the truth: the ex-military man was spying on Sonia Baker for Collins himself. After he killed Sonia Baker, Collins went along with McAffrey’s theory to blame the murder on Point Corp.

Collins is arrested, the ex-military man is killed in a shoot-out with police, Point Corps is exposed for planting a spy on Collins’ staff, and McAffrey gives Della the lead credit on the bombshell story. 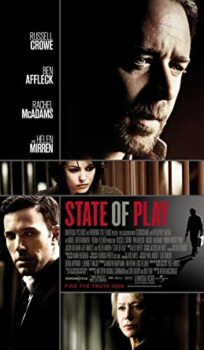