SHORT VERSION:
Roy and Helen survive the 24 hours in Hell Vision, but since only Roy was in the system under contract, Spike sends him back home but keeps Helen. He takes her to a Western-themed channel and puts her on some railroad tracks so she will be hit and killed by a train due to arrive soon, knowing that Roy will come back in to get her and that way he can still claim their souls like he wanted.

Roy re-enters Hell Vision with his own remote control so he can control his journey, but as he channel hops with Spike, he breaks his remote upon entering a cloak-and-dagger-themed channel. Spike threatens him with a rapier, but his kids sent a rapier to him through the Hell Vision satellite dish, and he uses his great fencing skills to effectively duel with Spike. They both then fight for possession of Spike’s remote, and they cross over into a Salt-N-Pepa music video, where Roy gets it and zaps Spike back to the cloak-and-dagger channel. He then goes to the Western channel and saves Helen, and they return home. The satellite dish melts into the Earth back to Hell, but not before it zaps the neighbor’s Rottweiler into it, and Spike is last shown dealing with both the dog and Crowley, an employee he had earlier banished to Hell Vision.

Roy drastically cuts back on the amount of TV he watches and opens up a fencing academy.

LONG VERSION:
Roy (John Ritter) and Helen (Pam Dawber) survive the 24 hours in Hell Vision. Though infuriated over his failure, Spike (Jeffrey Jones) is reminded that only Roy was in the system under contract, so that means that Helen is fair game. He therefore honors his deal with Roy by sending him back home, but he keeps Helen in the system and whisks her off to a Western-themed channel. He proceeds to tie her up to a wagon loaded with dynamite and situates her on some train tracks with a train approaching, knowing that Roy will have to come back into the system to rescue her, and that way he can still kill them both and get their souls like he wanted.

After seeing Helen’s predicament on TV and getting his bravery questioned by Spike, Roy re-enters Hell Vision, but this time he brings his own remote control with him to control his journey, after remembering how Murray (Bob Dishy) – the previous victim of Hell Vision that he and Helen crossed paths with during their initial run – managed to survive as long as he had by using his own remote to change the channel whenever things got too hot for him. He faces off with Spike in the Western channel, but gets shot in the heart. When Spike checks on him, he pulls out Roy’s remote from his shirt pocket and discovers that that took the bullet instead, and Roy starts fighting Spike while trying to regain possession of the remote. He gets it, and then he and Spike hop around various channels together – since Spike synced up their remotes – until Roy crash lands into a cloak-and-dagger-themed channel and breaks his remote.

As Spike threatens Roy with a rapier, his kids Darryl (David Tom) and Diane (Heather McComb) send a rapier from their home into the satellite dish and right into Roy’s hands, enabling him to dig up his long-buried talent for fencing and effectively duel with Spike. Roy cuts Spike’s remote free from his sleeve, and they fight for it and end up in a Salt-N-Pepa music video. Roy finally gets a hold of the remote there and uses it to zap Spike back to the cloak-and-dagger program. He then returns to Helen and presses the Power button to turn off Hell Vision, sending them both back home.

As they joyfully hug their kids, the neighbor’s mean Rottweiler shows up, but it gets zapped by the satellite dish just as it charges at them and is sent to where Spike is, and the dish then melts down into the Earth and back to Hell. On the cloak-and-dagger show, Spike is shown hanging onto a chandelier to avoid the dog and angrily screaming for his underlings to set him free, but then Crowley (Eugene Levy) – a vengeful employee that Spike had earlier banished into the system – appears and cuts down the chandelier to let the dog have his way with Spike. The young upstart employee Pierce (Erik King) takes over Spike’s executive position.

Having learned some valuable lessons, Roy drastically cuts back on the amount of television he watches and opens up a fencing academy. 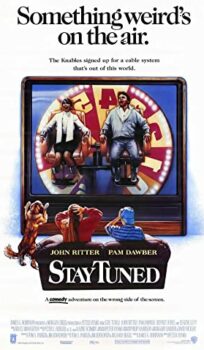