Lt. Henry Purcell (Jamie Foxx) dies by crashing into a mountain while chasing EDI (voice of Wentworth Miller). A little later, Lt. Kara Wade (Jessica Biel) finds her plane has been hit by Russian fire and she ends up crash landing in North Korea, leaving Lt. Ben Gannon (Josh Lucas) alone to bring in EDI. Eventually, EDI is damaged and Gannon’s plane is low on fuel, so they have to work together after they learn their captain, George Cummings, (Sam Shepard) is trying to kill off his three main pilots to avoid court martial. In North Korea, Gannon and Wade make it across the border to South Korea and EDI sacrifices itself by crashing into a North Korean helicopter, having learned from Gannon about the importance of your team. Cummings commits suicide when his treachery is discovered. At Purcell’s funeral, Gannon and Wade hook up. 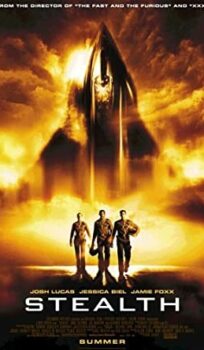