When Steel/John (Shaquille O’Neal) is stopping some of Burke’s (Judd Nelson) men from robbing a federal reserve one night, another of Burke’s men traces the signal on John’s transceiver back to his headquarters. John’s location is also determined through the signal, so Burke alerts the cops (who are after Steel because he has a gun built into his hammer that is similar to the kind Burke’s men use) on his whereabouts, and they arrest John at his grandmother Odessa’s (Irma Hall) house on suspicion of being Steel. While being held at the police station, he learns from Sparky (Annabeth Gish) via his transceiver that Burke has advertised a sale of his weapons on the Internet, and there would be an auction tomorrow in town for anyone who wanted to buy them.

The next day, Sparky manages to get John released, but that night, Burke’s men invade John’s headquarters and kidnap her just as she finishes telling John and Uncle Joe (Richard Roundtree) where she found out the auction was taking place. The duo head to the location, but John is quickly discovered and brought before Burke, who takes his hammer from him and brings out Sparky. John eventually tricks Burke into turning on the hammer’s electromagnet, allowing him to get it back, and then Sparky reveals some hidden guns in her wheelchair, which she uses to send the crime group leaders present running. After a fierce battle, Burke is killed when a round he shoots from his big gun at John bounces off of John’s armor and back to him, flooring him and causing some heavy crates to fall from above and crush him. John and the others escape just as Colonel David (Charles Napier) – whom Uncle Joe called to the scene – and his men arrive, and more of his men catch the various crime leaders as they are trying to flee the area.

John-as-Steel calls Colonel David the next day under a disguised voice. As David tries to figure out (unsuccessfully) where he is through a call trace, he tells John that he and his men have gotten evidence that clears him of any wrongdoing. John tells him that his work is done and he won’t be seeing him anymore, and hangs up shortly after David asks if this was John talking to him. 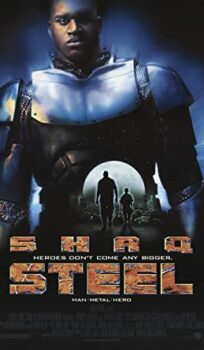