The relentless progress of Alzheimer’s in Alice (Julianne Moore) slowly takes a heavy toll on her and her family’s life. After losing her job as a University Professor, she agrees to be a guest speaker in an Alzheimer’s conference, where she can relay her own experience with the disease and be a support to others, either themselves afflicted or dealing with a loved one afflicted by it. While in the middle of the speech, she accidentally drops the pages but is able to recover and stay on track because she had taken the precaution of highlighting what was already read. She gets an emotive standing ovation from the audience.

Her husband John (Alec Baldwin), who has been offered a job at the Mayo Clinic in Minnesota, finds himself frictioning with Alice because she doesn’t want him to take it yet, but he says it’s not possible to postpone it -although it is evident he is starting to look at this as a way to flee from the pain Alice’s ailment is causing him-. Moreover, she feels at odds with her youngest daughter, aspiring actress Lydia (Kristen Stewart), because the latter doesn’t seem to take interest in her mother’s deteriorating situation.

Palpable signs of Alice’s decline are depicted: she starts to struggle with the daily questions she answers on her phone; she loses the phone for a whole month and it turns up in the fridge; she gets lost in her own house and, at an instance, wanders off the house, not knowing where to go or how to return -she is seeing wearing a MedicAlert bracelet that identifies her as “Cognitively Impaired”-; when her oldest daughter Anna (Kate Bosworth) -who has tested positive for the condition- gives birth to twins, Alice visits her but momentarily forgets who Anna is.

We eventually come to the sequence the film opened with: upon being diagnosed, Alice had recorded herself giving instructions to commit suicide by overdosing on certain pills stored in a specific place in her bedroom, when she came to the point of not being able to function at the most basic level. One day, after talking to Lydia -who is now taking interest in her mother’s plight-, Alice unwillingly opens and plays the video, which sets her off to fulfill the task. However, her caretaker arrives in the nick of time, causing Alice to get distracted and deterred from doing it.

In the end, John has left and Lydia has returned home to take care of her mother. The final scene has Lydia discussing a passage from the play “Angels in America” and asking a visibly impaired Alice her impression of what it is, to which Alice only answers, with difficulty: “Love”. 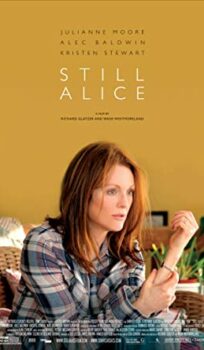