SHORT VERSION:
Steve reenlists to go to Sniper school and Michelle breaks up with him. Brandon goes back rather than lose all his ties to his family and home, despite his guilt and anger. Tommy kills himself after his wife leaves him and he is discharged as a result of a DUI and destruction of private property.

LONG VERSION:
The film focuses on three of the young men coming home from war, Brandon King, his best friend Steve Shriver, and Tommy Burgess. Brandon and Steve are set to be released from duty, while Tommy is supposed to go back to active duty after a weekend of leave. All of them are damaged from the war psychologically, Steve beats his fiance, Michelle, and sleeps in a hole in the front yard he digs for himself while drunk. Brandon is tortured by guilt and bad dreams and Steve is either drunk or angry for most of the film.

After Steve’s wife throws him out after starting a fight his first night back, he comes to Brandon and Steve to stay at Brandon’s family’s ranch. When Brandon reports to base to get his release papers he is told to go back to duty and refuses. He is sent to the brig but en route attacks the MPs leading him and escapes with Michelle, planning to go to a Senator who he met when he came home.

While he is gone Tommy gets into more trouble, first getting a DUI and after being discharged breaks a store front window during a fight with Steve.

Meanwhile Brandon has faced that no one can help him in his fight against the stop-loss and decided he should leave the country.

In the meantime Michelle has called Steve who arrives and confronts Brandon. During their arguement, it is revealed that Steve has reenlisted to go to Sniper school and Michelle gets angry at him, and they break up.

The fight between Brandon and Steve continues outside and Brandon refuses to return, and Steve leaves angry. Brandon then meets with a lawyer to get a new identity and passport to arrange passage to Canada. Later Michelle and he go drinking and he reveals that when he was saving Steve in Iraq, he killed a man and a child he was holding during the rescue.

The next day, Brandon calls his mother and is told Tommy has killed himself. At the funeral, Steve presents the flag over Tommy’s coffin to his wife and after everyone has left Brandon comes to the grave site. Steve has been hiding expecting him and attacks Brandon and they fight. Brandon tries to explain to him not only his reasons against returning to the war but why Steve should reconsider. The fight ends at an impasse just as the others have.

Brandon meets his family after at the ranch and drives to the Mexico border with Michelle and his mother. Just as he is about to arrive at the border he gets out of the car and stares at the Border and tells Michelle about everything he will be leaving behind.

The next scene is Steve and several other soldiers getting onto a bus for active duty, with Brandon sitting next to Steve. 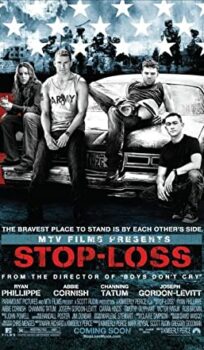