POOPER:
Francis Cosmo is an American businessman who wants to buy up properties in Newcastle, England for development, including Finney’s club. Instead of buying out the property owners, he is muscling them out to get the land cheaply. He tries to do this to Finney to get his club, but he fails. They ultimately agree to go into business together. Kate worked for Cosmo as a prostitute to help secure his deals, but she quit after she met Brendan. Cosmo tries to kill Brendan and Kate with a car bomb, but a friend of Brendan’s is killed by it instead. As a result of this, Finney calls off the deal and Cosmo leaves Newcastle.

LONG VERSION:
The city of Newcastle, England is hosting America Week, with several American companies in town in hopes of securing business deals for the city. An American woman, Kate (Melanie Griffith) is at a mall buying a new outfit where she bumps into a local man, Brendan (Sean Bean), who is looking for a job. After failing there, Brendan applies as a cleaner at a jazz club run by Mr. Finney (Sting), who only hires him because of their shared love of jazz. The club is located in the basement of a boxing gym. In addition to being the cleaner, Finney also hires Brendan to be an errand boy. His first job is to pick up the Krakow Jazz Ensemble, a Polish jazz band he booked to play that week, from the airport and take them to their hotel. He does so, and as they check-in, he sees Kate, the woman who ran into him at the mall. She’s at the hotel to see American businessman Francis Cosmo (Tommy Lee Jones), who is staying at the same hotel as the jazz band, and he appears to be the leading businessman in the American development deal. He’s also the one who told Kate to go to the mall to buy the new outfit. Cosmo tells her he’s busy and they’ll talk tomorrow.

After completing his first day of work, Brendan decides to celebrate his new job by going to a restaurant for dinner, and he sees that his waitress is Kate. The two hit it off and they agree to go on a date. While eating his steak dinner, Brendan overhears two men talking about buying Finney out of his club, and they are willing to kill him if necessary to get what they want. He goes back to the club to warn Finney about what he overheard, but he already left to go to the other club he owns. Brendan tries to enter that club, but he can’t go in because it’s a members-only club. Later that night, Brendan and Kate are on their date when he sees Finney exiting the other club. He catches up to his new boss, who’s with his mistress, but he tells Brendan to meet him at his house tomorrow. Brendan then resumes his date with Kate, and they end up spending the night together at his flat, but they don’t have sex.

The next day, Brendan goes to Finney’s house, where he meets Mrs. Finney, and he tells his boss what he heard at the restaurant. Finney tells Brendan that he is scheduled to meet with Cosmo’s representatives that afternoon because he wants to buy the club, but Finney doesn’t want to sell it. He thanks Brendan for the warning, then reminds him that he is to pick up the Poles and take them to their gig that night. Meanwhile, at the hotel, the hotel manager learns that the band he hired to perform at a luncheon for the American businessmen and the city government were killed in a car crash (the crash was shown during the opening credits), so he recruits the Poles to take their place. Once they begin playing, it’s obvious that they’re not very good. At the luncheon, Cosmo introduces Kate to one of the city councilmen. He later makes sexual advances towards her, but she physically rejects him and leaves the luncheon. All of this is seen by Cosmo, but he does nothing.

Back at the club, the two men from the restaurant arrive to confront Finney, but they are met by Finney and his henchmen, who are boxers from the gym upstairs. They proceed to overpower the two gangsters and break the arm of one of them. Brendan was there at Finney’s insistence and watched the whole thing. Afterward, they are placed on a train back to London, after Finney took their Jaguar away from them and gave it to Brendan. He takes his new car to the restaurant where Kate works and asks her to come away with him, and she agrees. They, along with the jazz band, go to a Polish club, and while the band is being honored by the club owners, Kate reveals to Brendan that she’s not the nice girl he thinks she is. He stops her and tells her that he doesn’t care what she does or what she did, all he wants is her, and they kiss. After they leave the Polish club, Kate finds a gun in the Jaguar’s glove box. Brendan says it must have been left behind by the previous owner. Later, Brendan is flagged down by another driver, saying he has a flat tire. When Brendan stops to check it out, he is jumped by the driver and another man, who beat him up and try to take Kate. Brendan gets the gun and shoots at the men, killing one of them.

Back at the hotel, Cosmo hears from the men who threatened Finney that he refused to sign over the club and they are back in London. He also hears from the surviving man who attacked Brendan and Kate and he tells him they failed because they didn’t know he was armed. Cosmo tells him to meet with Finney to set up a meeting with him, and they will settle this once and for all. Brendan and Kate arrive at the hotel and spend the night in the room of one of the jazz band members. While she is tending to Brendan’s wounds, Cosmo and Finney have their meeting. Finney tells Cosmo he knows all about his businesses, both legitimate and illegitimate. He saw what was happening in the city, and he knew an offer for his club was coming. Finney admits he was willing to sell, but when Cosmo decided to muscle him out instead, he fought back. Cosmo acknowledges he misread the situation and suggests they go into business together instead, and Finney says he’ll consider it, as long as Cosmo’s offer for the club isn’t insulting. Meanwhile, someone is building a bomb, but we don’t know where it will be placed.

The next morning, after they have sex, Kate tells Brendan that she knew that the two men who attacked them worked for Cosmo, and she worked for him too. She was supposed to have sex with a city councilman to help with Cosmo’s deal, something she’s done for him before, but she wouldn’t do it this time. She also knows that Cosmo will have them killed, so she suggests they go to Minnesota, where she is from (but Cosmo doesn’t know that). Brendan agrees, but she needs to go back to her flat to get some things before they leave. Once there, Cosmo is waiting for her. He tells her that if she really loves Brendan, they need to leave town. He even suggests going to Minnesota (he did know she’s from there after all). At that same time, Finney is introducing the Krakow Jazz Ensemble at his club, which he considers his contribution to Newcastle’s America Week. While the band is playing, we learn the bomb was placed in the Jaguar.

Kate has picked up Brendan in the Jaguar and is driving to the airport. She tells him that Cosmo paid for plane tickets to Minneapolis on TWA, but Brendan tells her that he heard on the radio that all flights on TWA are booked for weeks. Realizing they are about to be set up, they turn around and go to the club, where Finney is about to sell the club to Cosmo. After they arrive, the jazz band manager asks his newest friend Brendan to borrow the car so he can impress his new girlfriend. Brendan and Kate go into Finney’s office, and Cosmo immediately asks where the car is. Brendan then leaves to stop the manager from leaving, but it’s too late and the car explodes, killing him and his girlfriend. A distraught Brendan then pulls out the gun and goes to shoot Cosmo, but Finney stops him from ruining his life. Finney then tears up the contract, and Cosmo says he’s leaving Newcastle for good and canceling his development deals. He offers Kate a ride, but she says he’s lucky she wasn’t holding the gun. The movie ends with Cosmo and his men driving away, the fire brigade arriving to put out the car fire, and Brendan, Kate, and Finney reentering the club. 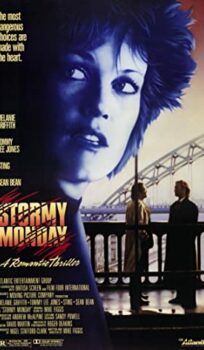