Pooper:
David Sumner (Dustin Hoffman) brings the wounded rapist/murderer Henry Niles (David Warner) into his home and is soon beseiged by the brutal Hedden family and their friends, who correctly surmise that Niles had killed the flirtatious young Janice Heddden (Sally Thomsett). David Sumner refuses to turn over Niles. The confrontation escalates and wimpy grad student Sumner ends up killing or maiming all of the attackers excepting one who is killed by his wife Amy (Susan George). Amy never reveals to David that she had cheated on him with Charlie Venner (Del Henny), or that she had been gang-raped by some of the Hedden crowd. David gives Niles a ride home.

Long Version:
Taking place in the 1970s, David Summer (Dustin Hoffman) and his wife Amy (Susan George) have moved from the US to a small, secluded English town where Amy lived with her father as a child. Amy’s house is big and gorgeous and David is a wealthy mathematician who has just received a generous grant. David differs very much in personality (as a pacifist intellectual) and physical stature (he is short and thin) from the physically-imposing and blue-collar denizens of the town.

Being unable or unwilling to do needed repairs needed on their house, he hires four locals named Charlie Venner (Del Henney), Chris Cawsey (Jim Norton); Riddaway (Donald Webster) and Norman Scutt (Ken Hutchison) to do the physically demanding remodelling while he spends most of his time in his study. Charlie used to date Amy and he and his mates constantly leer at her. David doesn’t get along with most of the townspeople except for the local policeman Major John Scott. Other townsfolk include an old drunkard named Tom Hedden, a mentally disabled man named Henry Niles (David Warner) (it is intimated that Niles has molested or violated children in the past), and Tom’s promiscuous teenager named Janice who is infatuated with David.

It is clear that the Summers’ marriage is a bit tenuous. Amy is emotionally unstable and occasionally very childlike. David is arrogant and occasionally condescending to both Amy and the townsfolk. David also seems to lack any sort of passion or traditional masculinity. Charlie and his crew grow more belligerent to David, who refuses to confront them. When Amy complains to David that they continue to ogle her, he simply tells her to stop being so provocative (she often wears mini skirts and no bra). Angry at David’s cowardice and blame, she allows Charlie and his crew to briefly see her topless as she prepares for a bath. This only causes the men to become more wild, eventually murdering the Summers’ cat and hanging it in David’s closet (Amy claims they did so to show that they can get into his bedroom without retaliation).

The next day, David invites Charlie and his friends inside his home and intellectually tries to trick them intto admitting they killed the cat. Amy is fed up with David’s approach and undermines him by bluntly letting the men know that they know they killed the cat. Though the jig is up, David still refuses to chastise or otherwise confront the men. Instead, frustrated with his wife, David agrees to let the men take him duck hunting the next day.

The following morning, they take David into the woods and teach him how to use a gun. They then abandon him in the woods, which he only realizes after several hours. While David is stranded, Charlie stops by the Summer household to visit Amy. He begins making sexual advances to her, and though she seems to enjoy his kisses, she clearly says no and pushes him away. Undeterred, Charlie slaps her several times and rips off her clothes before beginning to rape her. During the rape, Amy becomes less resistant and even more affectionate towards her ex-boyfriend, even kissing him and cuddling with him when its over (though she continues to say no and thinks of David during the rape). During this time, Norman also enters the house with his hunting gun and when Charlie is done, he also rapes Amy while Charlie begrudgingly holds her down (and Amy, though seemingly resigned, is in no way welcoming to Norman’s advances).

David eventually makes his way home and the next morning, fires Charlie and his crew. They object and rather than argue with them, he walks away with the firing final. Though he can tell that Amy is upset about something, she never tells David about her rape at the hands of Charlie and Norman. The two attend a local town church program where Charlie and the crew are. Amy begins breaking down in public, flashing back to the rapes (so regardless of her feelings at the time, she is clearly traumatized now). While at the meeting, Janice recognizes that Davidwill never really respond to her advances (despite him being somewhat flirtatious earlier in the film) and convinces Niles to come to a secluded barn with her. She begins seducing Niles. Janice’s father soon realizes that she has gone off with Niles (although he believes Janice was abducted by him). Tom gets a search party together and then, with Charlie and his crew, goes to the local pub to wait for news that Niles has been found.

Niles hears people searching for him and tries to silence Janice from attracting their attention. Not knowing his own strength, Niles fatally strangles Janice and runs off after realizing he is in trouble. Niles is accidentally hit by David and Amy as they drive home. The Summers take the injured Niles to their house and, thinking he was simply lost, call the police to report the accident. Tom, Charlie and the crew also learn that Niles is at the Summer’s house and, after grabbing some guns and more booze, they head off to get him. They tell David and Amy that Niles had run off with Janice and begin violently interrogating him. David kicks them out of the house where they continue to drink and grow more rowdy. The crew begins breaking windows and Amy begs David to let them have Niles, though he steadfastly refuses to give in.

Major Scott arrives and goes outside to confront Tom and the rest. The group begins to argue and Major Scott ends up shot dead (possibly by accident). Tom declares that they have now gone too far and can’t turn back. The men begin attempting to break in to the Summer’s house in earnest. Amy asks to leave the house, but David violently restrains her (even slapping her just as Charlie had done earlier) and tells her that the group must now kill both them and Niles to cover up their crimes. Niles is agitated by the violence and attempts to assault Amy, but David slaps him too and locks him in the attic.

The assault grows more heated as David very violently repels the group from his windows and doors, warning them not to come inside. Eventually, all but Tom (who is severely injured) make their way inside and David beats Chris and Riddaway to death. Charlie makes his way upstairs, pursued closely by David, where they discover that Norman has broken in through an upstairs window and has captured Amy. Norman tells Charlie to hold David at gunpoint so that he can again rape Amy. Charlie and David (both of whom are armed with guns) stare at Norman, but it is Charlie who ends up shooting and killing Norman. This allows David to attack Charlie and the two tumble down the stairs. The far more physically imposing Charlie gets the upper hand and pins David down. David manages to grab a “man-trap” (a contraption that looks like a bear trap that was used for stopping poachers) and smashes it on Charlie’s head, causing the trap to snap shut on Charlie’s neck.

David is thrilled that he got them all, when Riddaway (who seems to have recovered in true horror film fashion) attacks an exhausted David. Amy is forced to retrieve a shotgun and fatally shoot Riddaway before he kills David. Now that all the intruders are truly dead, David goes upstairs to retrieve Niles. David (after only giving a cursory check to make sure Amy is OK) leaves to drive Niles home. On the drive, Niles notes that he doesn’t know how to get back home. David smiles, thinking back to what he has done, and then says it is ok as he too doesn’t know how to get back home.

NOTE: From Curt, the original Moviepooper:
Our staff finally watched this one, and respectfully submits this alternate pooper for your approval:
Hey, it’s a 70’s movie. So, in spite of the much-touted “moral ambiguity” of director Sam Peckinpah’s characters, Hollywood formula trumps all, and the top-billed star (Dustin Hoffman) wins the big confrontation. The bear trap that appeared in the middle of the film, practically shouting “FORESHADOWING!” ends up around Charlie’s (Del Henney’s) neck. 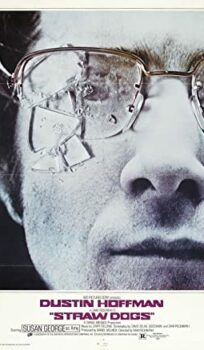