A successful businessman, Xiang, is attacked by Bison and his henchman Balrog. Xiang is able to fight them off until they threaten his young daughter Chun-Li. Xiang surrenders. Chun-Li grows up to become a concert pianist. She receives a scroll written in ancient Chinese text. On her way home, she saves a homeless man from street thugs and notices the man has a spiderweb tattoo on his hand. Xiang is seen working as Bison’s prisoner.

Interpol agents Nash and Maya investigate the murder of several heads of criminal syndicate families in Bangkok. Chun-Li meets with a woman who studies the scroll and reveals an image of the spiderweb seen on the homeless man. She recommends Chun-Li find a man in Bangkok named Gen. After a few unsuccessful days in Bangkok, Chun-Li rescues a man from street thugs but collapses in exhaustion. Gen takes her to his home and tells her he knows how to find Xiang. Chun-Li learns that Bison is holding the families of property owners hostage in order to have the property rights signed over to him; he has taken over a docking harbour and is awaiting the shipment of the “White Rose.” Chun-Li tracks one of Bison’s secretaries to a night club and forces her to reveal the location of the White Rose. Nash learns that Bison’s headquarters are right across from the police station.

We learn Bison grew up as the orphan son of Irish missionaries, stealing to survive. In order to lose his conscience, he forced the premature birth of his daughter, transferring his conscience to her. Bison’s henchmen come after Gen and Chun-Li, and Balrog blows up Gen’s house with an RPG. Chun-Li escapes to the harbour and learns the arrival time of the White Rose. This is a trick; later, Shadaloo soldiers capture her. Chun-Li is taken to Shadaloo headquarters and reunited with Xiang. Bison says Xiang is no longer useful and snaps his neck. Bison leaves Chun-Li to the henchmen, but she escapes. She is shot in the arm by Balrog and rescued by Gen, who narrowly survived the explosion at his home.

Chun-Li, Nash and Maya agree to work together. Chun-Li learns the real arrival time of the White Rose, leading to a shootout between Interpol agents and Shadaloo soldiers. Gen kills Balrog. We learn that the White Rose is Bison’s daughter Rose. Chun-Li fights Bison. After a drawn-out battle, she breaks his neck. Later on, Gen visits Chun-Li in Hong Kong. He shows her an ad for a Street Fighter tournament, telling her about a Japanese fighter named Ryu. Chun Li declines, saying that she’s home for now. 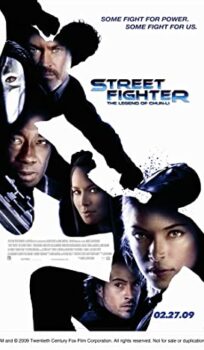