POOPER:
As the A.N. forces defeat Bison’s army and free Shadaloo, Guile defeats Bison himself in hand-to-hand combat and apparently kills him, and Bison’s base is destroyed. However, after the credits have rolled, Bison’s hand is shown breaking through some rubble, then selecting “World Domination” from a list of options on a computer and hitting “Replay.”

EXTRA-LONG VERSION:
Guile (Jean-Claude Van Damme), Cammy (Kylie Minogue), and T. Hawk (Gregg Rainwater) eventually launch an amphibious assault on Bison’s (Raúl Juliá) base while the A.N. forces await elsewhere for the signal to attack. The trio take out Bison’s radar system, but are discovered, and Bison tries to kill them, but fails. They get to one of the base’s entrances, and Guile heads in alone through a secret passage while Cammy and T. Hawk lay down electronic and visual markers to draw the A.N. forces to the location.

As Guile is searching Bison’s wrecked laboratory, the transformed Charlie (Robert Mammone) emerges and seizes him by the throat, but he lets go when Guile makes him realize that he is his best friend. After Guile points out his altered appearance to him, Charlie asks for him to help him, so Guile readies his handgun to shoot him and put him out of his misery. However, Dr. Dhalsim (Roshan Seth) intervenes and persuades Guile not to do it.

Meanwhile, the deadline for the A.N. to pay Bison the twenty billion dollars reaches its end with no payment made, so Bison decides to kill the hostages. Though he had planned to send Charlie into their holding pit to slaughter them, Guile hides himself in Charlie’s incubation chamber, and once he is brought up to the command room, he launches out of it with a flying kick and nails Bison, and all of the Shadaloo soldiers present start shooting while Bison gets out of harm’s way. Guile closes the holding pit on the hostages to protect them from the gunfire, and Chun-Li (Ming-Na), Balrog (Grand L. Bush), E. Honda (Peter “Navy” Tuiasosopo), Ryu (Byron Mann), and Ken (Damian Chapa) – who had been captured by Bison earlier on – get themselves free and assist him in beating down the soldiers. E. Honda then does battle with Zangief (Andrew Bryniarski), and Ryu and Ken run off to free the hostages after Guile promises them first-class plane tickets out of the country should they succeed. However, Sagat (Wes Studi) and Vega (Jay Tavare) follow them. Guile then tells Chun-Li and Balrog to find Ryu and Ken and get the hostages out.

The A.N. forces then arrive outside and start laying waste to Bison’s army, and Cammy and T. Hawk lead a group of the soldiers into the command room and save Guile before a bunch of Shadaloo soldiers can kill him. Cammy tells Guile that they are pushing back the enemy, but there is no sign of Bison, so he yells out for Bison to fight him one-on-one. Bison emerges from hiding and confronts him. Before the A.N. and Shadaloo soldiers leave the room so they can do battle alone, Guile orders Cammy to get the hostages out, and if he isn’t topside in fifteen minutes, then she and the rest of the A.N. forces must evacuate without him.

In their fight, Guile initially proves to be the better warrior, knocking Bison onto a control panel and seemingly electrocuting him. However, as Guile is reporting Bison’s demise to Cammy, the control panel activates Bison’s life support system, which revives him and infuses his uniform with superconductor electromagnetism, granting him the abilities of levitation/flight and projecting electrical bolts from his fists. He proceeds to pound Guile with these new powers, but when he attempts to fly in to strike the finishing blow, Guile hits him with a jumping spin kick, sending him backwards into his giant wall of TV monitors. The collision causes an explosion that kills Bison for the second and (supposedly) final time, but it also causes the base’s energy field to destabilize, dooming the place to imminent destruction, so Guile begins searching for an escape route.

Meanwhile, Ken tells Ryu that, since the A.N. soldiers are here, they should just find and take something of value and get out instead of doing as Guile instructed. Ryu refuses to do that, having come to accept that assisting the A.N. is more important. Ken goes off alone on his treasure hunt and finds a gold statuette, but as he checks the surveillance cameras for an exit, he sees Ryu entering the training room and getting ambushed by Sagat and Vega. He comes to Ryu’s aid, and together they defeat the duo. Ken leaves the statuette behind and heads off with Ryu to complete their task. Cammy, Chun Li, and Balrog end up getting the hostages free, and as they all retreat, they collect Ryu and Ken, as well as E. Honda, leaving his fight with Zangief a stalemate.

Zangief then notices Dee Jay (Miguel A. Núnˇez, Jr.) making off with a locked chest full of what is presumably money, and after questioning him about why he is running when the enemy is at their doorstep, Dee Jay smartens him up to the fact that Bison is the real enemy, and continues fleeing. As he later accesses a hidden passage to the outside, Sagat shows up and joins him in his escape, planning to make him split whatever is in the chest between them. In the end, they manage to avoid getting arrested, but they get their comeuppance when they open the chest and discover it to be full of worthless Bison Dollars.

Guile re-enters the laboratory to collect Charlie and Dhalsim, but Charlie refuses to come with him, knowing that society will never accept him in his altered form. Before they part ways, Dhalsim tells Guile that he will keep Charlie company until the end, as a means of atoning for allowing him to get that way. At the same time this happens, the other heroes are close to leading the hostages out of the exit, but the exit’s emergency door starts closing. Zangief then appears and uses his amazing strength to hold the door open so everyone can get out, and he leaves with them.

The base soon blows up, and when the heroes notice that Guile is nowhere in sight, they come to believe that he had perished in the blast. However, as the victorious A.N. forces are rounding up and arresting the remnants of Bison’s army, Guile turns up alive and unharmed. He tells Cammy to make a note that he needs a vacation, and then he tells Ryu and Ken that they earned their passports back, but they reply that he can keep them, for they plan to stay in Shadaloo and help rebuild the nation. After the heroes watch the last of the base crumble, they end the movie by striking their victory poses from the video game.

However, after the credits have rolled, the camera goes around inside the trashed command room, and we see Bison’s hand breaking through some rubble, then selecting “World Domination” from a list of options on a computer and hitting “Replay.” 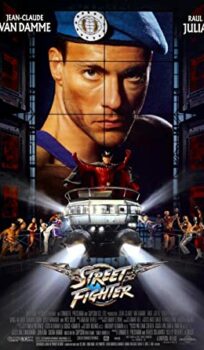