SHORT VERSION:
With help from Bobby, Waymon rebounds from having lost the Savoy Tower deal with Kagawa – thanks to David and his reluctant trainee broker Gary messing with his projections one night a few days earlier – and closes the deal with the Halloran brothers of the Harlem National Bank.

As they and their boss Mr. Drake are escorting the Hallorans out of the building, they run into David, and Bobby happily tells him of the deal they made. Gary then appears, and after announcing that he is quitting, he tells Waymon that he messed with his original deal on David’s orders. After Bobby points out David’s name on the nighttime sign-in sheet for that night, David yells a racial slur at him, prompting Waymon to floor him with a punch. Drake tells Waymon that he is now a partner in the firm, meaning that Bobby is now in the trainee broker program.

Waymon also cuts a deal of his own with the Hallorans where they will put up the money for his new girlfriend Natalie to have her own nightclub like she always wanted, and the nightclub becomes a success.

LONG VERSION:
Determined to see Waymon (Joseph C. Phillips) screw up the Savoy Tower deal with Kagawa (Glenn Kubota) in order to move up in the firm, David (David Marshall Grant) – along with a reluctant Gary (Sam Rockwell) – breaks into Waymon’s office after hours and has Gary alter Waymon’s projections for the deal. He then puts a post-it note marked “Trash” on the real files, which Bobby (Tommy Davidson) unwittingly takes and dumps into the trash the next morning as he delivers the falsified files to Kagawa. Kagawa phones Waymon later on and tells him that he is backing out of the deal, and Waymon angrily fires Bobby, believing that he deliberately screwed him over. As Waymon tries to find another buyer, Natalie (Halle Berry) stops by his office, and Waymon carelessly insults her by saying that, if Bobby didn’t have him chasing after her, he wouldn’t have blown this deal. She tells him to drop dead and leaves.

Moments later, Sheila (Annie Golden) presents Waymon with a copy she made of the final report for the deal. She tells him that it’s completely different than any of the drafts, so someone or something had changed the projections, and it wasn’t Bobby. Waymon finds Bobby in his neighborhood and apologizes for wrongfully accusing him, and tells him that he will be probably quitting the firm now, but he wants to get him his mailroom job back before he does. Bobby tells him to stay put, saying that he deserves the partnership in the firm, and tells him that he will get him a potential buyer on Monday.

When Monday rolls around, Bobby brings in the Halloran Brothers – whom Waymon briefly met in a club a few days earlier – to check out the deal, and it turns out that they are the owners of the Harlem National Bank. After a lengthy meeting, the Hallorans agree to be the buyers. As Waymon, Bobby, and their boss Mr. Drake (Jon Cypher) are escorting the Hallorans out of the building, they meet up with David in the lobby. Bobby happily tells him that the Savoy Tower deal has been closed, and then Gary shows up and – after verbally submitting his resignation to David – confesses to Waymon how he had changed the figures on his report on David’s orders. Bobby then gets the nighttime sign-in sheet and points out that David entered the building late that night, prompting David to yell a racial slur at him. Waymon responds by flooring him with a punch. Drake tells Waymon that he is now a partner in the firm, which means that Bobby is officially in the trainee broker program.

Waymon and Bobby then go to Natalie’s home, and Waymon apologizes for hurting her feelings. She accepts the apology, and they kiss. He and Bobby then take her to a vacant building, and Waymon tells her that he has made a deal of his own with the Hallorans where they will put up the money to turn this place into her own nightclub. She gleefully embraces them both.

Some time later, Natalie’s nightclub is up and running and doing great business. Waymon and Bobby stop in one night to party with her, and the movie ends with Waymon dancing with her while Bobby turns away Waymon’s snobby ex-girlfriend Diedre (Anne Marie Johnson) and her friends at the door. 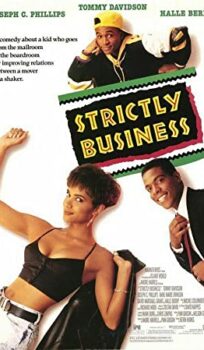