Brandi (Mena Suvari) is a nurse who, on the way home from a party, hits Tom (Stephen Rea) with her car. Tom is a sadsack who has just been fired from his job, evicted, and homeless. He gets stuck on Brandi’s windshield, still alive. Scared and not knowing what to do, she drives back home, parks the car in her garage, and waits for Tom to bleed to death.

She eventually calls her boyfriend, a drug-dealing pimp named Rashid, to help her get rid of the body. Tom manages to free himself from the windshield, but is too weak and injured to move. Rashid is reluctant to kill him, but Brandi prods him into doing so while she waits inside the house.

Even though they tied him up and covered him in plastic bags, Tom manages to break loose; he kills Rashid by stabbing a pen through his eye. He then staggers out of the garage, but Brandi catches up, knocks him out, and drags him back inside.

She douses Tom and the garage in gasoline, planning to blame Tom as a car thief who killed her boyfriend and set the place on fire. Tom manages to start the car, which pins Brandi to the wall. She goes for the gun, fires, and misses Tom; a spark from the gun ignites the entire garage. Brandi is burned alive while Tom staggers outside, where he is helped by neighbors. 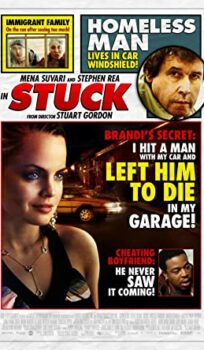