Shep (Hulk Hogan) fights and kills the bounty hunters and gets the cymian crystals he and Charlie (Christopher Lloyd) took from Charlie’s boss Beltz (Larry Miller) to his ship so he can power it up and leave the planet. He tells Charlie to go back to his house to make sure he (Shep) didn’t leave any traceable devices behind, but when Charlie arrives, he finds Suitor (William Ball) there, who had survived Shep’s assault earlier in the film. Suitor holds him and his family hostage and forces him to take him to Shep.

Upon encountering Shep, Suitor opens fire on him, but he retreats inside his ship. When Suitor starts threatening to harm the family, Shep activates the ship’s self-destruct sequence, remembering how “sometimes, you gotta lose to win,” and then he steps out and confronts Suitor. He offers to let him have his way with him if he lets the Wilcoxes go, which Suitor agrees to. The Wilcoxes drive off in their car, but once they are a distance away, Charlie stops and says that he is going back to help Shep, and he arrives just before Suitor can kill him. Suitor then transforms into his true reptilian alien self, and he knocks out Charlie and proceeds to brutalize Shep. However, Shep manages to stick some electrical cables into him, subduing him long enough so he and Charlie can get a safe distance away from the ship before it explodes, and the explosion kills Suitor.

Now full of confidence from his experiences, Charlie heads in to work the next morning and confronts Beltz. He hurls his complaints at him, and then quits the company. Shep bids the Wilcoxes goodbye and leaves Earth in the bounty hunters’ ship, with Beltz’s secretary Margie (Jo Ann Dearing) – who fell for him – along for the ride. 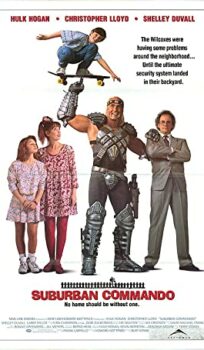