Short Version:
The wise old man wasn’t there to help Babydoll escape, she there to help Sweetpea escape. Sweetpea is the only person to get out of the mental hospital, the other are killed in Babydoll’s perception (no notes as to what happens in real life) and then Babydoll is lobotomized. However her lobotomy leads to the psychiatrist discovering what’s going on and hinted that the corrupt orderly is telling the police what really happened to Babydoll’s sister.

Extended Version:
Babydoll’s mother dies. Her stepfather is downstairs having a celebratory drink when he opens the will to discover that the estate was left to the girls and not to him. Drunk he picks up a knife and goes up stairs. He tries to attack Babydoll but she scratches him so he locks her in her room and goes after her little sister sister. Babydoll climbs down the side of the house, picks up the stepfather’s gun and runs upstairs firing at him to try to scare him. She goes into the room to find her sister dead on the floor and the movie isn’t clear on whether she accidentally shot her sister or if she just gets there too late. Either way she collapses in shock and her step father calls the police and has her committed for her sister’s murder.

As Babydoll is walking through the hospital in shock the audience sees several hints  to the rest of the movie such as a sign fire emergency warning sign, a map of the facilities and an orderly with a key. The stepfather bribes the orderly $2000 to forge Dr Gorski’s signature authorizing a lobotomy but the lobotomist won’t be there until 5 days later. Baby is taken to a room where she sees the Dr Gorski doing play therapy with patients and a radio.

Switch to Babydoll’s vision of the hospital. Babydoll sees herself as an orphan being sold by a corrupt priest to a mobster club owner who runs a brothel. The other patients are dancers and whores but she’s being sold to High Roller who will come for her in 5 days. Dr Gorski is a madam who teaches the girls to dance in order to entice the customers. When she has Babydoll dance, Babydoll finds herself in a vision where a wise old man gives her a sword and gun and tells her she can be free if she gains a map, a key, fire, a knife and a 5th sacrafice she must find for herself. When she comes to she finds that the men in the room were hypnotized by her dancing.

Babydoll convinces the other girls to help her discover the 4 items she needs to escape by luring men to watch her dance and then taking the items they need. The last girl, Sweetpea doesn’t want to take the risk but agrees to go along to protect her sister Rocket. Each time while dancing Babydoll sees the team facing some sort of fantasy battle to obtain the items; for the map stopping a courrier in a steampunk version of WWII; for fire killing a dragon; and for the knife diffusing a bomb on a train. Each time the wise old man walks them through what they need to do. When she’s dancing for the knife the radio gives out and the chef wakes up enough to realize what’s happening and stab and kill one of the girls (Rocket). The club owner having realized that the girls were trying to escape locks up Sweatpea, kills the other 2 girls and tries to rape Babydoll. She grabs the knife and stabs him and takes the key without having to use her power or the vision.

She and Sweetpea use the lighter to set a fire causing all the doors to unlock and the map to sneak past the guards. As they approach the gate with the key they see guards blocking the way and Babydoll suddenly realizes that she is the sacrafice and that she was never meant to escape. She distracts the guards while Sweetpea escapes. Suddenly the movie switches back and you see Babydoll back in the  asylum having just been lobotomized. The lobotomist is suprised at her reaction and talked to Dr Groski about her authorization for the treatment which she never gave. During the conversation Dr Groski tells the lobomist about the fire and her helping another patient escape. The Dr tracks Babydoll down to a room where the corrupt orderly (who she perceives as the club owner) is trying to rape her and calls the police. As he’s dragged away he starts to tell them about her step father.

We then see Sweetpea at a bus stop when 2 police approach her to ask her about the missing mental patient. The wise old man appears and tells them that she got on the bus hours ago and can’t be the person they’re looking for and lets her on without a ticket so she can escape to a new life. 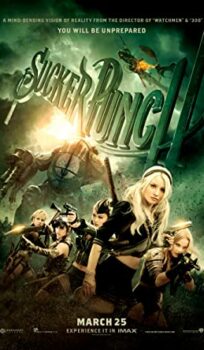