Dr. Cukrowicz, a brain surgeon in late 30’s New Orleans, is summoned to the French Quarter mansion of Violet Venable (Katherine Hepburn), a wealthy widow.  She informs him that she is thinking of donating a million dollars to Lion’s View, the state mental hospital where Cukrowicz works and where he has become known as one of the leading practitioners of the prefrontal lobotomy, an operation that sometimes calms the symptoms of severe schizophrenia, but also is know to damage the memory and personality of many of the people upon whom the operation is performed.  But there’s a catch; Mrs. Venable want Cukrowicz to perform a lobotomy on her niece, Catherine Holly (Elizabeth Taylor), a young woman she says has gone mad and is full of “obscene babblings” about Mrs. Venable’s late son, Sebastian, who died while travelling through Europe and North Africa with Catherine the previous summer.

Cukrowicz meets Catherine, and she seems quite normal, although she gets very touchy about the subject of Sebastian and his death.  Her mother (Mercedes McCambridge) and brother (Gary Raymond) are very concerned about her as well, but they are also being tempted with money by Mrs. Venable if they agree to allow Catherine to be lobotomized.

Finally, Cukrowicz gives Catherine a dose of sodium pentothal, and the truth about Sebastian and his death emerges.  He was a closeted homosexual who used the women in his life to make pick-ups with other men.  When he was younger and his sex partners were older, sophisticated men, he used his mother to arrange meetings.  When he developed a taste for younger, poorer men, he started using Catherine, who would get the attention of the youths at public beaches, at which point Sebastian would move in with cash and propositions.  On the day of his death, a group of these young men confront Sebastian and Catherine away from the beach, where the former insults them rather foully.  They move in on him, chasing him through the streets of the town, until hunters and prey confront each other on a hillside overlooking the sea.  There, Sebastian dies of a heart attack and his pursuers partially cannibalize his corpse.

Finally remembering the precise events of Sebastian’s death helps relieve Catherine of the burden of secrets and guilt she has been suffering.  But being forced to confront the truth about her son causes Mrs. Venable to suffer a breakdown.  She begins talking to Cukrowicz as if he were Sebastian, and drifts away to her bedroom, chattering away about their next summer vacation.  Catherine and Cukrowicz, the ending implies, may have a future together. 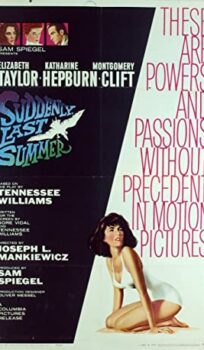