Tod (Sterling Hayden), the sheriff of a small hick town, is in love with Ellen Benson, a young widow whose husband died in the war.   Tod is surprised by news that the president’s cross country train will be stopping there for the president to switch to a limo.  This last minute change was made because of a suspected assassination attempt.

Ellen lives with her father and young son, in a house on a hill overlooking the train station.  John Baron (Frank Sinatra) and 2 other men show up at the Benson’s pretending to by FBI.  They are actually assassins hired by a foreign government to kill the president.  They hold the Benson’s hostage.

Tod, the sheriff, and a secret service man go up check the Benson house before the train arrives.  The assassins kill the secret service guy and wound Tod.

The TV repairman shows up, and is also taken hostage.  Baron is annoyed by the young naive TV guy, and to shut him up, tells him to get to work fixing the TV.  The TV guy hooks the electric wires to the metal supports bracing the sniper rifle.  When the sniper grabs the gun, he is electrocuted. Baron shoots the TV guy.  Ellen picks up a dropped gun and shoots Baron. 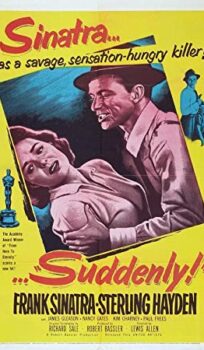