Avery and his friends Max (Sean Patrick Flannery), Brett (Jay Mohr), and T.K. (Jeremy Sisto) all play a part in abducting renowned gangster, Carlo Bartolucci, aka Charlie Barret (Christopher Walken) and blackmail to front them the $2 million for the ransom and arrange the safe return of Avery’s sister, Elise (Laura Harris) from an unknown third party.  As leverage, they remove one of Charlie’s fingers to express the severity and threaten that if Elise is hurt in the process, he will be as well. Everything appears to go as planned until Charlie’s contacts suspect that kidnapping had an insider, and one of his captors is behind it.  As the night goes on, and the group’s friend, Ira (Johnny Galecki) is pulled into the situation, Charlie attempts to manipulate the group into turning on each other… by hinting to both Ira and T.K. that one of them is behind the kidnapping of Avery’s sister.

The whole thing comes to a head when they’re all playing poker and reminiscing about a trip to Atlantic City, which resulted in Brett losing a very large sum of money ($25,000) in which he takes a note out on the wager.  Ira and T.K. then confront Brett who refused to explain how he was able to pay the money back.

As this whole fiasco is happening, Charlie’s driver and muscle, Lono (Denis Leary) is attempting to track his boss and friend down while the money is being collected and a ransom drop with the Elise’s kidnappers is being arranged.  He manages to connect to ID them through a hostess at the bar where the group managed to abduct Charlie and manages to get a possible lead to where they all are.

The confrontation with Brett is interrupted when Charlie’s associates call and inform them that the drop has been arranged and demand a safe place for them to return Charlie.  They agree on a place close by but argue what the best directions are to give them in order to get there.  Max intervenes and gives precise and specific directions to the rendezvous… which tips off Charlie that Max knows more than he is leading on. Max was with Elise when she was abducted and claimed that he had gotten lost in the city and had parked in lot to check a map.  T.K. and Brett jump Max and accuse him of setting the whole thing up… and in return, they proceed to cut his finger off.  Before they manage to do so, Avery intervenes…

It turns out that Avery (Henry Thomas) was the one behind his sister’s kidnapping… and the plan to abduct and extort was merely a way of covering his tracks to repay a substantial debt he owed to loan sharks (he revealed that he lost over $50,000 on a football game).  He asked Max to help him only because he feared that the loan sharks were going to kill him and he was afraid to go to his father for help.

Before any actions by the group were taken, Lono breaks in, shoots Brett in the leg, and demands the release of Charlie.  Charlie assures them that the arrangement for Elise’s return is still good and they all can still walk away from everything alive.  After they all part ways, Avery rushes to the hospital (Elise’s release location), only to discover that she never dropped off there.

Charlie and Lono manage to track down the hoods who were supposed to have been holding Elise, only to discover that they never had her to begin with, and only had half of the ransom… leading Lono to dispatch both hoods with gunshots to the head.

In the end, Max and Elise cut a deal with Avery’s loan sharks, without him knowing.  They plotted the $2 million ransom and promised the hoods half of it (obviously way more than what Avery owed) in exchange for making it look like they had her (for the sheer point that no one got hurt).  With their million dollars, they take off on a yacht owned by Max’s father and plan on living off the grid.  However, Charlie and Lono manage to catch up to them (Max spilled the beans about his father’s yacht to Charlie during his captivity) in order to collect the rest of their money, and as a final action, Lono dispatches them both with gunshots to the head. 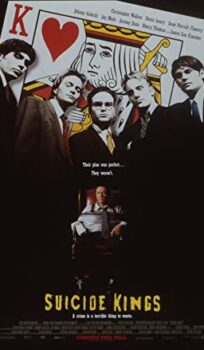