After his ‘on the job training’ as a tramp teaches John L. Sullivan (Joel McRea) something about the dignity of man, he goes back out to give money to the homeless. Unfortunately, he is mugged by a tramp, who in his greed for Sullivan’s cash, neglects his surroundings and is struck and killed by a train. Sullivan, having temporarily lost his memory due to the blow to his head, assaults a trainyard boss. The tramp’s corpse is identified as Sullivan’s, and by the time Sullivan regains his senses, he has been sentenced to six years on a chain gang. While imprisoned, Sullivan’s sole happy moment is the night the prisoners are allowed to watch a funny show. Unable to communicate with the outside world in any other way, Sullivan “confesses” to his own murder. The notoriety of the case gets his picture in the newspapers, and he is quickly rescued by his Hollywood staff. He decides to abandon his attempt to make his serious opus, O Brother, Where Art Thou?, and having learned that making people laugh is just as valid an art, returns to lighthearted filmmaking. He’s also free to woo The Girl (Veronica Lake) because his wife married his former business manager immediately upon learning of his “death.” 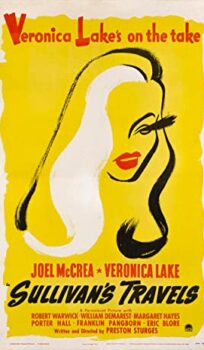