After Vice-Principal Phil Gills (Robin Thomas) threatens Freddy Shoop (Mark Harmon) with job termination if the class did not meet the average passing mark of 70 on the end-of-term test, Shoop promises each student a favor if they promised to study.

He teaches Denise (Kelly Minter) how to drive, and when she takes her driver’s test, she passes. She is also revealed to be dyslexic, but on Shoop’s urging, she goes to see a reading specialist to fix it. He shows the original Texas Chainsaw Massacre in class for Chainsaw (Dean Cameron). He allows David (Gary Riley) to throw a 4th of July party at his house, which ends when a firework David lights up accidentally sets fire to his couch. Eakian (Richard Steven Horvitz) wanted to be invited to that party, and is allowed to come. Chainsaw and David use Anna-Maria’s (Fabiana Udenio) wish, since she had no use for one because she wasn’t taking the final test, to have Shoop drive them to and from their job. Larry (Ken Olandt) is given a bed to sleep on in class. Pam (Courtney Thorne-Smith) is allowed to move in with him for a bit, but she moves out when he figures out she is attracted to him and he tells her he can’t return the affections, which is due to his attraction to Robin (Kirstie Alley), a teacher who has been helping him with the class. He becomes Kevin’s (Patrick Labyorteaux) workout partner, and lastly, he becomes the Lamaze coach for the pregnant Rhonda (Shawnee Smith).

After the class finishes the final test, Rhonda begins to go into labor, and is rushed to the hospital. Some time later, she tells the others she had a baby girl, but gave the baby up for adoption because she wasn’t ready to be a mother. Shoop meets up with them soon after to tell them that Gills had mailed the test results to their homes, and that the class average was 63, meaning that he would lose his job. When Shoop meets with Principal Kelban (Frank McCarthy) and Gills to discuss his tenure and his employment, the class and their parents come to speak on his behalf. It is revealed that only David, Kevin, Eakian, Pam, and Jerome (Duane Davis) (who claimed he was stuck in the bathroom for the whole 6 weeks) passed summer school, but Kelban informs Gills and Shoop that the class average went from 28 to 63, a 125% improvement. He commends Shoop’s teaching abilities and grants him tenure, leaving a sour taste in Gills’ mouth.

It last shows Shoop and Robin walking on the beach together, and after some talk the two kiss. 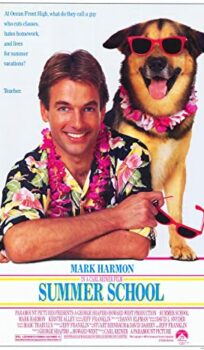