Submitted by Curt, the original pooper

Norma Desmond (Gloria Swanson) shoots Joe (William Holden) in the back after he confesses to Betty that he was Norma’s gigolo, and told her to forget him and go marry nice guy Artie Green (Jack Webb–yes, that Jack Webb). He then tells Norma that he’s leaving her and Hollywood, and going back home to work at the newspaper in Dayton.

The police realize that she perks up a little when the newsreel cameras arrive, and they encourage her to “perform” for the cameras, hoping to extract a confession.

Max (who is not just her butler–he’s the director who discovered her, and he was her first husband as well–played by Erich Von Stroheim), makes Norma believe she’s performing as Salome–in the script she wrote, “directing” the newsreel photographers. Max’s actions are seen as an act of loving kindness, because he ensures that she descends completely into her own private alternate reality, and will never be able to make a meaningful statement to the police. 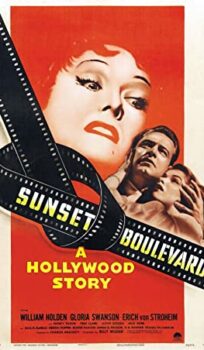