Rose (Amy Adams) asks Nora (Emily Blunt) to take care of a client’s house while the former attends the baby shower. Distracted by the owner’s kitten, Nora ends up accidently burning the client’s house down. Because of their lack of insurance and their reputation down the toilet, Rose disbands Sunshine Cleaning. This causes a rift in the two sisters’ relationship.

Nora decides to do the right thing by finally giving Lynn (Mary Lynn Rajskub) her mother’s fanny pack of memories. But Lynn rejects them, stating that her mother was a pathetic drunk and how Lynn was an idiot to think that Nora was actually interested in her (as there was slight sexual tension between the two).

Rose breaks things off with Mac (Steve Zahn). All the while a spark of interest grows between her and Winston (Clifton Collins Jr.).

The two sisters make up at Oscar’s (Jason Spevack) birthday party. Later that night, Rose sends her mother a final message to Heaven through the van’s radio, and the two sisters finally find their mother’s movie scene as a waitress on TV.

Joe (Alan Arkin) sells his house and uses the money to start Sunshine Cleaning back up again, declaring Rose the official boss and him her partner. Rose is finally able to put Oscar in a private school. Nora sets out on her road trip, with the little kitten she found at the now burned down house in tow. 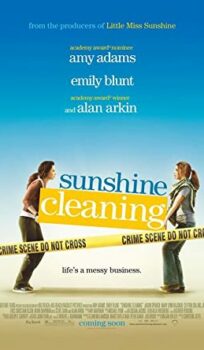