Five dim-witted former state troopers are called to action when Governor Jessman (Lynda Carter) announces that there is a border dispute between the U.S. and Canada when they discover that a French-Canadian town is on American soil, which means that the troopers would be called in the replace the Mounties. This leads to the troopers getting involved in a war with the Mounties and Canadian citizens.

The troopers discover that contraband drugs are being smuggled into the U.S. They initially believe the Mounties to be behind the crime, until they see that the town’s mayor, Guy de Franc (Rob Lowe), is the true crook. The troopers team up with the Mounties to take down Guy and his goons, and they are arrested.

The troopers and Mounties appear to make peace until Jessman announces that the intended turnover is postponed, so the troopers won’t replace the Mounties, and they continue to fight each other. 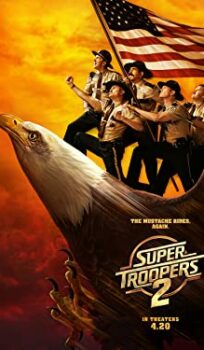