After Kylie (Skyler Shaye) and Zack (Justin Chatwin) find the disc that Biscane’s (Jon Voight) flunkies accidentally lost in the baby stroller while trying to set up a portion of Biscane’s satellite, they show it to Kahuna (Gerry, Leo & Myles Fitzgerald). After analyzing it, he finds that the children’s program on it contains scrambled data that technically activates a descrambler program similar to the ones used on TV cable boxes to receive premium channels, and he realizes that Biscane is up to something that will go down in 30 minutes at Bobbins’ World when he launches his children’s TV network there. He and Zack then take Kylie, Archie (Max & Michael Iles), Finkleman (Jared & Jordan Scheideman), Rosita (Maia & Keana Bastidas), and Alex (Joshua & Maxwell Lockhart) back to Bobbins’ World, and Kahuna has Archie keep his special rattle and tells him that he will understand later why he wanted him to have it.

Kahuna then has Zack infiltrate the event as a security guard and has him focus the camera on his hat on Biscane’s satellite dish. After finding that it is generating a tremendous amount of power, he figures out that Biscane has hidden a subliminal code in the transmissions of his network and it will be used to broadcast a mind control pulse to children around the world, robbing them of their free will and enabling him to control them. He gets in his baby buggy helicopter and flies in just as the network begins airing, and he fires a laser at the satellite dish to destroy the signal. However, Biscane – having anticipated Kahuna’s interference – has altered the dish’s decoder box to make Kahuna’s laser reflect back at him, and Kahuna and his transport subsequently disappear in an electrical light show. Biscane covers for this by telling everyone that it was all a hologram, but Zack then destroys the satellite dish by hand. Real security guards then come in and seize Zack, and Kylie tries to convince Stan (Scott Baio) and Jean (Vanessa Angel) that Biscane has a mind control pulse on the network and that he killed Kahuna and the babies do speak their own language, but Biscane dismisses all of this and tells everyone that the place will be fixed up and the premiere will resume at 6 p.m., and he decides to not press charges against Zack (for some reason).

While Archie, Finkleman, Rosita, and Alex chat over Kahuna’s disappearance, Archie randomly activates the special rattle, and it plays a pre-recorded message from Kahuna stating that, because this is playing, it means that things can’t be good and the world’s children are still in danger, and he encourages them to start believing in something more powerful than a superbaby: Themselves. Emboldened, the quartet decide to step up and become heroes. Meanwhile, Kahuna – who was captured while everyone was blinded by the lights – is brought before Biscane, who reveals that he intends to take over the minds of everyone, not just kids. He says that, at 6 p.m., all worldwide TV networks will switch from their space satellites to his own personal satellite, and he will send out the mind control pulse through his satellite into the networks so anyone who watches them will be brainwashed into buying his company’s products and stocks and make him fabulously rich. He then has Kahuna locked in a special cell.

The four babies try to sneak away in Stan’s van so they can drive back to Kahuna’s secret base, but Stan and Jean – the latter having spotted them taking the keys – stop them from going. Kylie comes up to them and successfully convinces them that Biscane is not the man they think he is and that he does have a mind control pulse in the works, and together they all head to Kahuna’s base. As this happens, Kahuna succeeds in escaping his cell, and he gets to Biscane’s main lab and takes back the disc before Biscane can use it for the universal uplink switch. He then gets to the roof, where his helicopter is, and takes off it in back to his base, but Biscane and his henchmen follow him. Shortly after Stan, Jean, and the others arrive and greet Zack, Kahuna approaches the base and warns everyone that enemies are coming. To even the odds a little, the babies go into Kahuna’s Imagination Station and become their “superbaby” selves.

Biscane and company follow Kahuna inside the base, but soon find themselves facing not just him, but the superbabies and their older friends. After a rather short battle, Biscane’s forces are bested, but as the good guys are celebrating, Biscane’s flunky Tascha (Anastasia Trovato) snatches the disc from Kahuna’s hand while he is distracted and throws it to Kane, who is up in Kahuna’s communication center. He puts the disc into the computer and bounces the pulse off of Kahuna’s space satellite and onto his to get his plan in motion. As Biscane gloats, it is revealed that he is Kahuna’s elder brother Kane. He was the one who broke into their father’s safe in his laboratory and got a hold of the youth formula all those years ago, wanting to gain superpowers and stay young forever, but he was knocked flat by a bolt of lightning that shattered a window in the lab, causing him to spill the formula. Kahuna then swallowed it by accident, but he feels that Kahuna deliberately robbed him of something great and has hated him for it ever since.

After Biscane informs Kahuna that the pulse has no fail-safe, Kahuna directs the superbabies to deal with Biscane, and Alex ends up beating up him and his other flunky Crowe (Peter Wingfield) before everyone joins Kahuna in the com center. Since the pulse can’t be stopped, Kahuna – on a suggestion from Archie – decides to alter it to give the viewers more free will instead of less. This causes everyone to shun watching TV and do other things, foiling Biscane’s plan.

Biscane tries to escape, but Stan blocks his path and then punches him into the Imagination Station. He then sees a button saying to press it to realize the power of your true self, so he presses the button believing that it will give him superpowers. Instead, he is turned into a toddler, and Crowe then takes him away, promising to take care of him. Kahuna tells the babies that he is going to pack up and move on, despite them begging for him to stay and let them help him fight bad guys, especially Archie. Kahuna tells Archie that he already has a couple of real heroes at home in the form of Stan and Jean, and everyone then bids Kahuna farewell.

At Bobbins’ World a couple of months later, a TV news report says that the sales of children’s books, music, and toys have tripled in the last month, and TV ratings everywhere continue to plummet because all children are either outdoors, playing sports, or reading. Kahuna was also spotted saving a bus full of kids in Mexico from plunging over a cliff. Zack is in a relationship with Kylie and is working at the center with her, and one day, Stan and Jean surprise him by finding his long-lost birth mother, and they have a happy reunion. Kahuna then appears outside the house in his transport and gets Archie’s attention, leaving him the special rattle and telling him that he is a full-fledged Junior Kahuna now. As Kahuna flies away, he tells Archie that he has an emergency over in Europe, but he will be back. 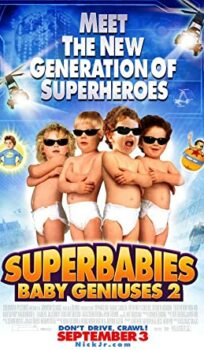