Submitted by Alex and Spectre

SHORT VERSION:
The guys get alcohol, make it to the party, but only Fogell hooks up with a girl. Seth and Evan are going to different colleges, fight about it for most of the movie, but eventually have a drunken make up conversation. The movie ends with both Seth and Evan going their separate ways with the girls they each have a crush on.

LONG VERSION:
After numerous misadventures, Seth (Jonah Hill), Evan (Michael Cera), and Fogell aka “Mclovin” (Christopher Mintz-Plasse) get to the party with the alcohol in tow.  The three race off for their respective girls.

Evan meets up with Becca (Martha MacIssac) who is drunk and wants to have sex.  Evan gets plastered himself so he is ethically justified, but realizes he can’t through with it since he doesn’t want to take advantage of her.  She winds up puking on the bed minutes later.

Seth becomes the man of the party due to the alcohol.  He talks to Jules (Emma Stone) outside, only to find out she doesn’t drink at all.  Confessing that he likes her a bit, he winds up passing out, giving her a black eye in the process.

Fogell meanwhile, has met up with his girl Nicola (Aviva) who seems to believe he is Mclovin.  He almost gets to have sex with her when Officers Slater and Michaels (Bill Hader and Seth Rogen) arrive and kill the party.  Slater and Michaels talk to Fogell, letting him know that they knew he was under age but saw a bit of him in themselves.  To make up for “blocking the cock” they pretend to arrest him, giving him at the very least a second chance with Nicola, or as Slater says “pussy forever.”  To cap off the night, they destroy the police car and write up a false report.

Seth carries a passed out Evan to safety and they end the night on good terms.

Seth and Evan wake up the following morning and go to the mall.  There they meet Jules and Becca.  Becca and Evan go off to buy comforters, while Seth and Jules go to get makeup for her black eye.  Seth and Evan share one last look before heading off, signifying that there friendship matters more to them than any hookup they hoped to achieve the previous night. 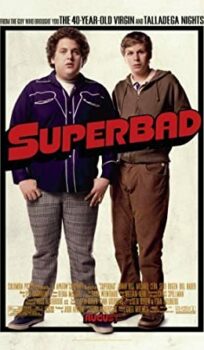