Lou Landers becomes the Hourglass supervillain and steals the element Cerilium to help build a machine with which he will steal the life force of the entire city to become immortal. During his first encounter with the Dragonfly (aka Rick Riker), he wounds the hero using titanium blades before escaping. At Thanksgiving celebration at Rick’s house, Lou sees Rick’s cut arm and realizes that Rick is the Dragonfly. He returns as Hourglass and kills Rick’s aunt Lucille.

After the funeral, Rick (Drake Bell), knowing that Hourglass may come after Jill if they are a couple, rejects her love, telling her they can never be together. Heartbroken, she leaves, and Rick is left depressed, moping around the house, and even throwing out his costume. Trey and uncle Albert talk some sense into him after Albert shows him what’s enscribed on the ring Rick’s father gave him before dying. On television, Rick hears of an award ceremony at the convention center where thousands are gathered. Knowing that Hourglass may strike, Rick takes up the Dragonfly persona again.

Backstage, Rick confronts Lou and asks for his help in seeking Hourglass. Hoping to ruin the hero’s reputation, Lou points to the Dali Llama. Dragonfly begins to batter the monk as the curtain rises. Dragonfly attempts to expose him to the crowd as Hourglass, only to literally expose him after tearing off his robe and underwear. This starts a fight among the audience’s religious followers. Jill sees Lou with the canister of Cerilium and realizes that he is the Hourglass. Lou escapes into a hero convention and retrieves his machine, pursued by Dragonfly. Jill is injured after saving Dragonfly from one of the Hourglass’ flying blades. After being encouraged by Steven Hawking, Dragonfly continues the pursuit, carrying Jill.

On the rooftop, Dragonfly kills the Hourglass by shoving one of his own bombs near his face after it attaches itself to Dragonfly’s crotch. The explosion knocks Jill off the building and Dragonfly goes after her. Jill sees the ring on Dragonfly’s hand (thanks to a torn glove) and realizes that Rick is the Dragonfly. The two finally declare their love and kiss. Just when all hope seems lost, Rick suddenly sprouts wings and flies back up to the rooftop where he is congratulated by Albert and Steven Hawking who is accidentally thrown off the edge.

The movie ends with Rick and Jill flying through the sky and Rick is narrating how he will always be a superhero. Just as he is about to finish his narration, he and Jill get hit by a helicopter. 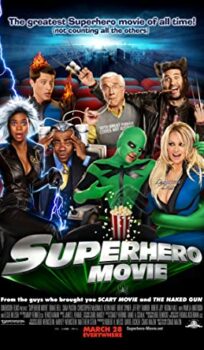