Submitted by Curt, Eric and Evan

Zod, Ursa and Non (Terence Stamp, Sarah Douglas and Jack O’Halloran) use the threat of harm to Lois (Margot Kidder) to force Kal-El (Christopher Reeve) into the chamber that will remove his superpowers. Unbeknownst to them, he has turned the chamber ‘inside-out,’ and it is their powers that are removed. Lois beats up Ursa, and then Kal-El drops the now-impotent villains into a ‘bottomless pit’ in the Fortress of Solitude.

Evan adds:
Richard Donner, the director of the first Superman, shot roughly 2/3 of Superman II before the producers fired him and replaced him with Richard Lester, who directed the theatrical cut. In the last few years, the Richard Donner version was recompiled and released, with digital graphics and some of Lester’s work filling the unshot scenes.
In the Donner version:
Zod, Ursa, and Non are released when a missile Superman throws in space explodes and shatters the phantom zone prison. There are markedly longer action scenes, including a longer moon attack and a far more complex attack on Metropolis. In this version, Superman again tricks the evil Kryptonians into losing their powers in his Fortress of Solitude. He throws Zod into an endless chasm, Non falls into the chasm (not realizing his powers had been lost) and Lois Lane punches Ursa into the chasm. Superman then destroys his Fortress of Solitude because Lex Luthor knows where it is and used its secrets to aide Zod and threaten Lois. Superman and Lois reaffirm their love for each other, but Superman realizes that as long as she knows his secret, she will be in danger. Superman reverses time by flying backwards around the Earth ito the point where neither Lois nor Lex realize that Clark is Superman and the Kryptonians have not been released from their prison. Superman continues to woo Lois through his alter ego, Clark Kent. Superman also returns to the diner where the truck driver had beaten him up when he was powerless and teaches the truck driver a lesson, paying the diner owners for damages. 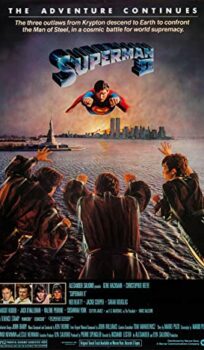