After destroying the super computer with acid, Superman (Christopher Reeve) takes Gus (Richard Pryor) on a flying trip and lands at a coal mining company. Superman takes a single coal and crushes it into a diamond for Lana Lang (Annette O’Toole) who had to hock her ring to pay for heat. Superman then asks the mining company to hire Gus as a computer operator. Clark Kent gives Lana the diamond ring in an engagement position, although he isn’t asking her but high school jock Brad (Gavan O’Herlihy) encounters them, gets mad and jumps him but Clark moves, Brad crashes.

A new lottery ball machine is brought in the office, but when they turn it on, it goes haywire shooting balls everywhere. 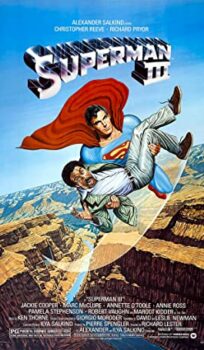