The crew of the Nightingale receive a distress signal and immediately go after it.  Kaela (Angela Bassett) knows the person who sent the distress signal – an old (abusive) flame by the name of Karl.  The Captain dies en route due to a malfunction in his stasis pod.  Nick (James Spader) takes over.  On an abandoned moon mining facility where the distress signal originated, they pick up one lone survivor and an alien artifact.

It turns out the lone survivor is actually Karl, who had become younger due to the alien artifact.  The artifact is actually a bomb that can destroy planets but also create life (think Star Trek Genesis deal).  Karl strands Nick on the moon, kills the remaining crew members except Kaela, and trashes all the stasis pods except one.  Nick manages to get back on board and he and Kaela rig the alien artifact with a smaller bomb and use the artifact to lure Karl to a separate part of the ship.  They blow the bomb, killing Karl and blowing the artifact into space.  Despite the risks, Nick and Kaela jump into the remaining stasis pod and the ship makes a jump back to Earth as the artifact explodes.

Nick and Kaela reach Earth, but swap some of their DNA due to being in the same pod – Nick has one of Kaela’s eyes and she has one of his.  Oh, and Kaela’s pregnant.  And it’s a girl.  Congratulations.

However, according to the computer, the artifact’s shockwave will reach Earth in about 51 years and will either destroy the planet or give everything a bump in the evolutionary department. 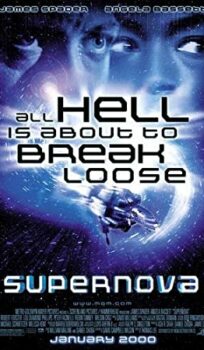