As Cody, Lani, Chicken Joe, Tank, and the Hang 5 are using makeshift hang-gliders to fly across a large lake of lava during their journey to the Trenches, Cody – in an effort to score points with the Hang 5 – gets into another confrontation with Tank over who can be first to the other side. As they fly along, Cody deliberately bumps into Tank and sends him off-course, but he fails to notice that this foolish act of his has caused Tank to get sent right into Joe, and Joe’s glider is subsequently destroyed. Though Undertaker saves Joe from falling into the lava, Joe’s surfboard falls in and gets burned up. When everybody lands on the other side, Cody finds out about what happened to Joe and his board, and the Hang 5 scold him for recklessly endangering the lives of Tank and Joe. Cody tells the quintet that Tank has been sabotaging him ever since they first started this trip, and he was just trying to win so he could prove that he could be one of them, but J.C. tells him that, by putting his friends in danger, he is nothing like them. Cody then appeals to Lani to tell them that he didn’t mean for this to happen, but she doesn’t back him up, mainly due to the fact that she overheard him telling Tank before their flight that he is going to become the next member of the Hang 5 and will be leaving Pen Gu and everything he has there in the dust when he does. Everyone then continues on ahead of Cody.

That night, the group makes camp some distance away from the Trenches, and while the others are asleep, Cody eavesdrops on a conversation Mr. McMahon is having with J.C. Mr. McMahon tells J.C. that he knew that Cody was nothing but trouble from the beginning, citing how he almost got Joe killed today, and he informs J.C. that Joe’s death would’ve been on his head since he is Cody’s mentor. J.C. defends Cody by saying that he is not a troublemaker; he just got carried away competing with Tank, and he complains that Tank has been acting like a jerk ever since they first embarked on this journey. Mr. McMahon replies that he wanted to know how Cody deals with his problems since he (J.C.) thought he was special, and now he knows. He also accuses Cody of caring only about winning and nothing else, and remarks to J.C. that maybe THAT was what he saw in Cody back at Pen Gu. Downhearted, Cody writes an apology to Joe on his surfboard, and he tells him that he can use this board because he deserves it more than him. He then sets it down in front of the sleeping Joe before walking off into the night.

The next morning, Joe reads out the message on Cody’s board to everyone, and Lani tells the others that they need to go find him. However, J.C. stops her and tells her that she needs to let Cody work things out on his own and that he will come back when he is ready, and he is sure of this because he has been down this road himself. Mr. McMahon then announces to the group that it would be best for them to get down to the Trenches now because the best waves come at dawn, and after Joe points out that a storm seems to be coming in, Undertaker tells him that they are counting on it. Meanwhile, Cody comes across a stone statue of a surfing penguin, and as he reads the hieroglyphs on the base of it, he discovers that this statue marks the resting place of a great hero of Slaughter Island, who gave up his chance at fame and fortune in order to stay with his people and protect them from the treacherous waters of the Trenches by performing the sacred rites of Ride the Lightning. It then occurs to him that “Ride the Lightning” is the meaning behind the “R.T.L.” initialism that the Hang 5 is seeking to do, and after seeing the storm out on the horizon, he realizes that the Hang 5 plans to do something out on the ocean during that storm. He thus hurries towards the Trenches to warn Lani and Joe about it.

The group arrives at the Trenches and are greeted by the sight of bird skulls, broken surfboards, and jagged rocks, and Lani, Joe, and Tank soon find out what “R.T.L.” really means: Surfing a 50-foot wave during a lightning storm. The Hang 5 essentially inform the trio that this is their last test, and whoever successfully completes it with them will officially become the newest member of the team. Feeling that the danger of this challenge is too great, Lani and Joe back out, but Tank agrees to participate, even though he is clearly reluctant. He and the Hang 5 ride the wave up and reach the top, but shortly after getting there, he is almost hit by a few lightning strikes, causing him to lose his nerve and nearly cause the Hang 5 to wipe out before he falls down the back of the wave. As the Hang 5 ride in the wave’s tube, lightning strikes Undertaker, and he is swept up by the water. Hunter dives in to rescue him, and the others fail to come out the other side and fall into the wave before it hits the jagged rocks. The Hang 5 wash up on shore with Hunter carrying a lifeless Undertaker, and Lani gets to work on trying to revive him.

Meanwhile, Tank is still stuck out on the ocean, and he starts to come under attack from several more lightning bolts, thanks to his golden, jewel-encrusted surfboard (which he earlier took from the treasure room of a king of an ancient penguin civilization that worshipped surfing) functioning like a lightning rod. Cody appears on the edge of a nearby cliff, and after seeing that Tank is in trouble, he dives into the water, takes an old surfboard from the ocean floor, and swims out and saves Tank. They then navigate their way through the jagged rocks while they are being chased by another big wave, but the wave soon catches up to them and throws them towards a bunch of tall rocks. Thankfully, J.C. jumps in and catches the duo before they can hit them, and they all dive into the water and wait for its turbulence to die down before returning to shore. Joe ends up saving Undertaker by taking two jellyfish and using their electrical stings on his chest to jolt him back to life (like an A.E.D.), and then J.C. appears with Cody and Tank. Lani hugs Cody, and J.C. tells everyone that Cody risked his life to save Tank. Moments later, Tank thanks Cody for saving him, ending their hostilities.

After the storm ends, Mr. McMahon extends an invitation to Cody to join the Hang 5, but after looking at Joe and especially a saddened Lani, Cody respectfully declines. He explains that he once believed that joining the Hang 5 would make him a somebody, but he realizes now that he is already part of a great team with Joe and Lani. Mr. McMahon then decides to postpone his retirement so he can have some more adventures with the Hang 5, and after he suggests to them that they now try surfing during a tsunami, they agree to do so and head off into a nearby gorge towards another beach, with Cody and the others close behind them.

The movie ends with Cody doing another impromptu commercial for his Pen Gu Surf Academy during his interview with SPEN, but this time with the Hang 5’s personal endorsement. 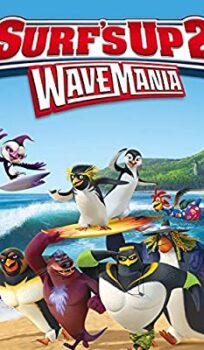