After helping Z get back out on the water again and spending a day surfing with him and Lani, Cody asks Z to come watch him perform in the Big Z Memorial Surf Off tomorrow. Z declines, and soon after, Cody asks him why he faked his death during the first Surf Off and went into hiding. Z explains that, on the last day of that competition, winning had become everything to him, and he was confident that he was going to beat Tank. However, while they were out on the water, he saw that Tank was a much better surfer than he was. Unable to stomach the thought of being seen as a has-been by his fans, he decided that it would be better to dupe them into thinking that he was dead, so he went high up on a big wave and then fell into it and disappeared just before it crashed down into the Boneyards (an out-of-bounds section on North Beach littered with sharp rocks). After he tells Cody that he has no intention of ever coming out of hiding, Cody replies that he is giving up, which goes against what he preached during his prime. Z replies that he is indeed giving up, and if he doesn’t like it, then he can just find his own way and leave him out of it. He then shuffles off into the night with Lani following him, and a disappointed Cody takes the clamshell medallion that Z gave him when he was a boy and throws it into the ocean. He then takes the koa board he made with Z’s guidance and walks off into the jungle back to North Beach.

Along the way, Cody gets his leg caught in one of the native Pen Guans’ snare traps and ends up hanging upside down from a tree branch. The natives then appear and charge towards him with their spears, but before they can do anything to him, he is saved by Chicken Joe, who had earlier befriended the natives, and he tells Cody that he has been looking all over for him. They then hear the horn signaling the start of the Surf Off, so Joe has one of the natives cut Cody down before they all make haste to North Beach. As Cody successfully completes the first surf, Z shows up to watch him from behind some bushes, and Cody eventually makes it to the finals along with Joe and Tank. As Cody is preparing for it, Lani approaches him, and after he remarks that he might just win this thing, Lani says that that is clearly all he came for, because he made it clear last night (by returning here after his argument with Z) that winning is more important than her or Z.

While the three finalists are riding their first wave, Tank tries to knock Cody off his board, but he winds up falling off of his instead, and Cody and Joe end up tying for first place. As Cody and Joe ride the second and final wave with Joe surfing in front, Tank drops in from the top of the wave and lands in between them, then starts trying to take out Joe. Despite knowing that he is costing himself the championship, Cody intercepts Tank and tells Joe to go on and finish the ride, and Joe wins the competition by default when Tank pushes himself and Cody out of bounds and into the Boneyards. Tank catches up to Cody there and knocks him into the water, but then he smashes into a big rock himself and gets rendered unconscious. Lani swims out to him and brings him back to shore, and as Cody fights to keep the turbulent waters from overwhelming him, Z suddenly appears on the rock that his old surfboard is jammed into as a memorial to him and gets his attention. Cody tries to swim towards Z’s outstretched flipper, but after Z sees that another big wave is coming in, he tells Cody to stop swimming and just let the wave throw him right to him. Cody does as instructed, and the wave sends him right into Z’s flippers. They then take shelter behind the rock just before the wave comes down.

Cody and Z use the latter’s old board to paddle back to the beach, and Z snatches Cody’s koa board away from Reggie, the obnoxious surf promoter, as he is attempting to auction it off since he thought that Cody died out there. After the crowd recognizes Z, a woman asks him where he has been, and he replies that he was lost for a little while, but then Cody pointed the way back. Lani then rushes up to Cody and shares a hug with him. Reggie then tries to hype the return of Z and refers to him as a living legend, but Z tells him to shut up, saying that he is just a guy looking for some nice waves and good friends. He then tells the crowd that there is a swell happening on the north shore and invites them to join him there, and Reggie is left alone to fume on the beach before his long-suffering talent scout, Mike, rips his toupee off while the cameras are still rolling. Tank tries to flee with the championship trophy, but a bunch of young penguins he mistreated take it and play hot potato with it until it falls and breaks. When asked by an interviewer why he gave up the title to help Joe, Cody replies that that is what friends do.

While having fun on the north shore, Cody tells the documentarians that this whole experience has been amazing for him, and he remarks that he doesn’t think that he has had a better friend in all of his life than Z and that he has everything he needs. Then, having gotten bored with talking about himself, he asks the documentarians if they have recorded everything they needed, and after they confirm that they have, he heads into the water to surf with his friends. 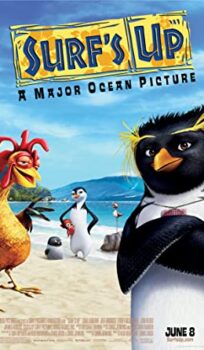