Agent Greer (Bruce Willis) is an FBI man living in a future where people live their lives through remote controlled robots called “surrogates”. Nearly everyone in the world use surrogates virtually every moment of the day, a turn of events that has all but ended crime.

Greer is estranged from his wife Maggie (Roasmund Pike). They lost their son in a car accident and she has since hid behind her surrogate to shield herself from the pain. Meanwhile, two people are killed when their surrogates are destroyed by a strange energy weapon, something unheard of as damage to the surrogate has never before translated to harm for the user.

Greer investigates and discovers that the culprit is Dr. Lionel Canter (James Cromwell), the wealthy creator of surrogates who laments his invention and wants to bring the world back to the way it was before. Canter uploads a virus into the surrogates central computer that will kill all surrogate users before committing suicide. Greer prevents the virus from killing people, but when faced with the decision to let the surrogates themselves be destroyed, he lets the virus take effect, rendering the machines useless but leaving their owners healthy.

Greer reunites with his wife in person for the first time in ages while a newscaster announces that for now, the world is without surrogates. 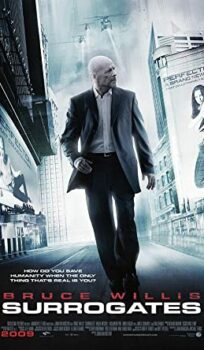