After zombies have overtaken much of the world, a pair of families living on an island off the coast of Delaware battle over how to deal with the problem. Patrick O’Flynn and his clan believe that the dead should be destroyed before they come back to life while Seamus Muldoon and his followers feel the dead should be locked-up and looked after until a cure can be found.

Muldoon captures Patrick O’Flynn, Sarge and their group and takes them to Chuck’s ranch. Muldoon plans to use O’Flynn’s dead daughter Jane to prove his theory that zombies can be taught to eat something other than people. As they wait to see what happens, Janet O’Flynn sneaks into the ranch with weapons for her father’s group. A gunfight breaks out and the zombies in Chuck’s holding pen are released. Chuck sacrifices himself in order to lead the zombies toward Muldoon’s men. During the confusion, Jane bites her twin sister Janet’s hand. The zombies wipe out Muldoon’s men before being killed themselves. Muldoon fatally shoots O’Flynn, who then mortally wounds him.  While the survivors are surveying the damage, Janet sees Jane bite a horse (proving Muldoon’s theory). Just as she’s about to tell Sarge what she saw, O’Flynn kills her. O’Flynn says goodbye to them, then staggers off to die.

Sarge, Tomboy and the teen think about staying on the island but decide to take the money and head back to the mainland. While Sarge (in a voiceover) wonders if Muldoon’s plan could have worked, several zombies are shown eating the horse.

O’Flynn and Muldoon (both now zombies) walk toward each other. Each man stops and tries to kill the other by repeatedly firing a pistol, but their guns are out of bullets. 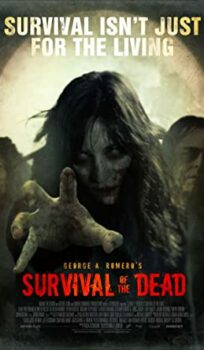