Submitted by Evan B and Patay

POOPER
The ballet academy is a front for a coven of witches led by the “black queen” Helena Marcos, who was thought to be long dead. Suzy (Jessica Harper) stabs Marcos to death in the climax which triggers a supernatural occurance destroying the coven and Suzy escapes just in time as the building bursts into flames.

LONG VERSION:
Suzy Bannion (Jessica Harper) is an American dancer recently accepted into a prestigious dance academy in Germany. She arrives at the academy in the midst of a storm. When she arrives, a student named Pat is in a clear panic and flees from the school. Suzy overhears Pat yell out the words “secret” and “irises.” That night, Pat and her aunt are murdered by a supernatural entity.

Suzy eventually moves into the dance academy. The school is run by a director named Madame Blanc (Joan Bennett) and strict head teacher Miss Tanner (Alida Valli). The owner of the academy is an old woman who is always unseen. Suzy befriends another girl named Sara (Stefania Casini) who was close to Pat. Sara believes that the teachers of the academy are up to something sinister. Her belief is strengthened when Suzy points out that the teachers are not leaving the academy at night. Soon thereafter, Sara is killed and the heads of the school cover-up her death.

Eventually, Suzy discovers that Pat had been in touch with an academic named Frank Mandel (Udo Kier) and reaches out to him. Mandel and one of his colleagues explain that the dance academy was the former home of a witch named Helena Markos who was killed by the local townsfolk. There are rumors, however, that a group of people still worship Markos. She also learns that witch covens cannot survive without the head witch.

Later on, the rest of the school goes on a field trip, leaving Suzy alone at the academy. She begins investigating the premises and comes upon a wall with iris-shaped decorations hung thereon. Remembering Pat’s words, she touches the flowers and opens a secret passage. Suzy enters and sees the walls adorned with occult language. She stumbles upon Madame Blanc, Miss Tanner, and several others praying to Markos and plotting Suzy’s death. Suzy is then pursued by a member of the coven that sees her and exits the other end of the secret passage. She emerges into the room of the academy’s owner. The owner is sleeping in the bed and Suzy approaches her. The owner awakens and becomes invisible while revealing that she is a still-living Helena Markos. Markos then conjures the corpse of Sara to assault Suzy. In desperation, Suzy fatally stabs Markos when she sees Markos’ silhouette during a lighting strike. This causes the academy to burn down, Sara’s corpse to disappear, and the members of the coven to die. Suzy escapes the academy alive as it burns to the ground. 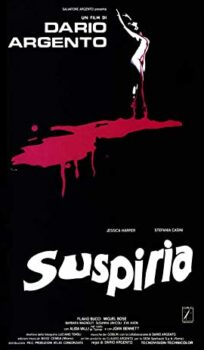