Ben (Dana Andrews) is a young man who lives with his father (Walter Huston) and stepmother, on the edge of the huge Okefenokee swamp.  While searching for his dog, Ben finds Tom (Walter Brennan) hiding in the swamp.  Years ago, Tom was convicted of murder but escaped.  While everyone thought he was far away, he has been hiding in the swamp all this time, to stay near his daughter Julie (Anne Baxter).  Tom convinces Ben that he is innocent.  They form a partnership, with Ben selling the hides that Tom traps.  Tom’s share of the profit goes to Julie.

In a side plot, the slimy Jesse (David Carradine) has been harassing Ben’s stepmother.  Ben goes to Jesse’s cabin to confront him.  Jesse was the witness against Tom.  Jesse lets slip that town bullies Tim and Bud Dorson really committed the murder.  Jesse testified against Tom for fear of what the Dorsons would do to him.  Ben forces Jesse to tell the truth to the sheriff.

Ben goes into the swamp to bring Tom back, since everyone knows he is innocent.  However, the Dorson brothers go to kill Tom and Ben.  The Dorsons shoot at them, but miss.  Since he knows the swamp so well, Tom lures them into quicksand.  Bud Dorson sinks into the quicksand and dies.  Tim Dorson (Ward Bond) escapes into the swamp, but knows that if he ever returns, he will hang for murder.  Ben and Tom re-unite with Julie. 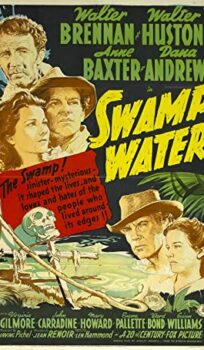