Short pooper:
Ray (Jason Momoa) was killed by Santos the hitman (Manuel Garcia-Rulfo) in the same attack in which Bennett (Nelson Franklin), the journalist who wanted to help Ray against BioPrime, was also killed. The whole revenge plot, from then on, was actually undertaken by Rachel (Isabela Merced) herself; Ray was alive only in her mind, that whole time.

Long version:
After Ray’s attempt to interrogate BioPrime’s Chairman, Shah (Raza Jaffrey), fails when Santos appears and shoots at them both, killing Shah, Ray escapes with Rachel, but, later, they all meet at a diner. In a very calm and civilized exchange, Ray gets Santos to reveal that Congresswoman Morgan (Amy Brenneman) -the same one who was supposedly fighting BioPrime’s unethical practices from her power position- was his contractor and that, although it was nothing personal, he would still keep pursuing Ray until the end. Ray promises they’d meet again in Pittsburgh and, as they walk away, Santos signals at Rachel and tells her “they’d meet soon” (important later).

Rachel and Ray make it together to Pittsburgh; however, when they reach the baseball stadium, the FBI spots them and gives chase to Ray, who is pursued by Agent Meeker (Lex Scott Davis), all the way to the roof. Once there, seemingly cornered, Meeker confronts him and tries to convince him to surrender, but, as she does so, tells him “they had been talking over the phone, to remember the stuffed teddy bear Paloma”.

It is here we all discover that, this whole time, after the subway attack, the one who really undertook the whole mission to avenge her family was Rachel. Ray was mortally wounded by Santos and died by Rachel’s side, while trying to assure her they’d be alright. We, then, revisit the scenes of all the killings supposedly perpetrated by Ray, but actually done by Rachel (WHEN SANTOS TOLD HER AT THE DINER THEY’D MEET SOON, IT WAS TO HER, ALONE). Meeker makes her say her name, “Rachel Cooper”, to have her come to her senses, but, then, she runs and jumps off the stadium’s roof, into the river. She is still rescued by paramedics while in Meeker’s custody, but starts a fight and causes an accident, to escape.

Now on the run, she is comforted, one last time, by a vision of Ray, who assures her that both he and her mother Amanda (Adria Arjona) would always be with her. She comes to a rally where Morgan is campaigning for State Senator for Pennsylvania, set on avenging her entire family and, later, follows her to her offices. Santos spots and pursues her, and they have a fierce showdown; eventually, she gets the upper hand and kills him.

Later, she confronts Morgan about her under-the-table deals with BioPrime and goads her into admitting -on tape- everything, including ordering the hit on Bennett, which Morgan unapologetically does, and flees. While the media informs on the attempt on Morgan’s life and the FBI is still wondering the motivations behind Rachel’s actions, Meeker receives a voice memo with Morgan’s confession, which leads to her arrest.

As the film ends, Rachel boards a plane to start anew elsewhere, with a reinvigorated sense of hope. 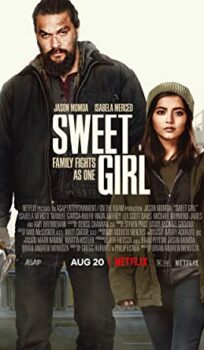