Short pooper:
“Amanda” (Ellen Barkin) gives birth to a girl and, perceiving her daughter loves her, dies peacefully from pregnancy and delivery complications and goes to Heaven. Later on, she finds herself in the comic conundrum of watching over her daughter, either as a male or female angel, as a condition of being able to spend eternity in Heaven.

Long version:
After the body of Amanda’s male original self, Steve (Perry King), is fished off the river, an investigation ensues. Steve’s former lover -and co-conspirator in his murder-, Margo (JoBeth Williams), wanting to fend off any attention from herself, visits Amanda under the premise of discussing the matter, but it is with the intention of planting the murder weapon in Amanda’s couch, which she gets to do. Amanda is eventually arrested as a suspect, when her behaviour and inconsistent backstory lead Police towards her.

While cross-examined, everyone believes her to be insane, since she insists on actually being Steve, but physically appearing as a woman because of the second chance given to her by God (both Richard Provost and Linda Gary) and botched in revenge by the Devil (Bruce Payne) -which is what happened earlier in the film-. This gets her committed to a mental institution, where, later, she discovers her one-night stand with Walter (Jimmy Smits) got her pregnant. She goes over the matter with Walter and a doctor, who advises her there could be deadly complications to it, but she is determined to have the baby.

Amanda and Walter, having grown fond of each other, decide to get married. Time passes and she gives birth to what turns out to be a girl. The health complications everyone dreaded ensue; seeing how her newborn daughter seems to be endeared to her, she weakly exclaims: “I think she loves me” and, then, dies in peace.

Since the original deal that brought Steve back to life, in the beginning, was that he had to find a female who genuinely loved him so that he could be admitted into Heaven, Amanda sees this fulfilled. However, she finds herself wondering whether she should watch over her girl as a male or a female angel, while pondering the virtues of having been both sexes in life and the two ids of God agreeing with her.

The films ends with five more years having passed; Walter brings the little girl (Molly Okuneff) to the grave of “Amanda Steve”, to pay their respects; Amanda still hasn’t been able to decide on what gender to assume as an angel and asks “for a bit longer to think it over”; and the two ids of God reassure her, saying: “Sure. You’ve got all eternity!!”. 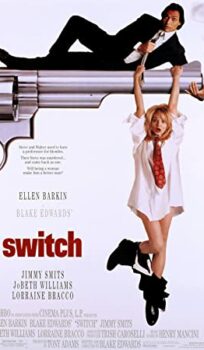