SHORT VERSION:
Having grown tired of being afraid of life and stinging over Tori rejecting him after he confessed to her that he wasn’t a banker, Matt decides to ride the Ball, a steel sphere that gets rolled down a hill. He ends up rolling off the edge of the hill down a steep embankment and into a person’s swimming pool, but manages to get out before he can drown. Barry, having chased after him, celebrates his crazy stunt with him, and as they walk back to the party, Wendy and Tori show up to check on Matt. Matt apologizes to Tori for lying to her and asks if he can have her number, and after playing a bit of hard-to-get, she gives it to him and admits that she was impressed with what he just did.

Due to Kyle being visibly relieved when she was earlier rejected for a graduate program in England that she applied for, Wendy breaks up with him. Barry asks Ashley, a Goth girl he connected with, what he will do with himself now that he is unemployed, and she suggests that he go to college to figure that out, which he is receptive to. After Matt gets Tori’s number and kisses her goodbye, he, Wendy, and Barry leave to get breakfast. His policeman father Bill and his partner Frank are called in by the pool’s owner to check out the sphere, and Bill finds Matt’s video store nametag in the pool and smiles, pleased that Matt took a shot at something in life.

LONG VERSION:
Matt (Topher Grace) and Tori (Teresa Palmer) have a fantastic time together while at a different party in Beverly Hills, and they end up having sex. Back at Kyle’s (Chris Pratt) party, Wendy (Anna Faris) – who had accepted a proposal of marriage from Kyle earlier in the night – tells Kyle about how she had applied for a graduate program at Cambridge University in England. He doesn’t hide his discontent over this, but she points out that she still hasn’t opened her admissions letter yet. She has him read it aloud and it says that she has been rejected. He is visibly and audibly pleased about this as Wendy starts crying, and for the rest of the night, she is clearly more disappointed in Kyle than at having been rejected and starts to believe that what Matt had earlier told her about Kyle holding her back was true.

After their lovemaking session, Tori compliments Matt on being honest, but Matt finally admits to her that he works at Suncoast Video and isn’t a banker. Extremely upset at his deception since she believes he did it to get into her pants, she tells him to go screw himself and goes back to the party. Matt collects Barry (Dan Fogler) and they drive away, and as they go, Matt tells Barry that he slept with Tori but admitted his real occupation to her, and Barry patronizes him for not trying to enjoy himself for one night. Barry then offers him some cocaine to turn his frown upside down, despite him being the driver, but when he tries to do it, he veers the car off the road and into a ditch.

A police cruiser then pulls up behind them, and the cops turn out to be Matt’s father Bill (Michael Biehn) and his partner Frank (Bruce Nelson). Barry ultimately confesses to them that he stole the car and found the cocaine in it, and Bill – fed up with Matt’s indecision over what career path to take in life – then starts bashing the car with his nightstick to try to coerce Matt into getting a better job to pay for the damages. Matt yells at him that he is sorry for not being able to figure out what he wants to do with himself and for being such a failure, but Bill tells him that he is actually less than a failure because he has never tried to succeed at anything. Bill and Frank end up letting them both off the hook with a warning and drop them off outside Bill’s house, but before departing, Bill tells Matt in a less condescending tone to just take a shot at something. Matt then remembers that Tori left her car back at Kyle’s place, so he heads back there with Barry in the hopes of finding her.

When they arrive, they discover Kyle is taking bets on who will ride “The Ball”, a big steel sphere that someone enters and rides as it is rolled down a hill (which Bill had earlier mentioned to Matt and Wendy was something that hasn’t been done since he was a kid). As Barry reconnects with the Goth-like girl Ashley (Michelle Trachtenburg) he met during his first stay there, Matt finds Tori and stops her outside next to the Ball. She tells him with much disappointment that she thought he was different than everybody else, but he was just another scared little boy. This gives him a spur-of-the-moment motivation to volunteer to ride the Ball, despite protests from Wendy and Barry. Before hopping inside, he yells to the crowd that he has been so scared of his life that he has missed it, and now he isn’t going to be like that anymore. Wendy tries to talk Kyle out of executing this stunt, but he shows no sincere regard for Matt’s safety.

The ball gets rolled down the hill, but it goes out of control, smashing into parked cars and rolling down an embankment right into a neighbor’s swimming pool. The ball submerges completely, but Matt succeeds in escaping it before he can drown. Barry runs up to him, and together they whoop and holler with excitement over the whole hazardous episode. As they walk back up to the party, Wendy and Tori show up in Tori’s car. Wendy hugs Matt, and then Matt asks Tori if he can have her phone number and apologizes for lying to her. After playing a bit of hard-to-get, Tori tells Matt her number and admits that she was impressed with what he just did. They get back to the party and Matt is cheered by all.

Wendy makes Kyle admit that he was glad that she wasn’t accepted into Cambridge because it meant that she wouldn’t be leaving his side, and she tells him that their relationship is over, leaving him to have a crying breakdown. Barry chats with Ashley about what he is going to do with himself now that he is unemployed, and she suggests that he go to college to figure that out. Liking the idea, he kisses her.

Matt gets Tori’s number on the back of a Mint Travel card he got hours before from Brent (Seth Gabel) and kisses her goodbye, and after looking at the front of the card, it looks like he is considering taking a trip to somewhere in the world. Bill and Frank get called in by the owner of the swimming pool to investigate the sphere, and Bill ends up secretly finding Matt’s Suncoast Video nametag floating around, and he smiles to himself as he pockets it. Matt then leaves with Wendy and Barry to get breakfast. 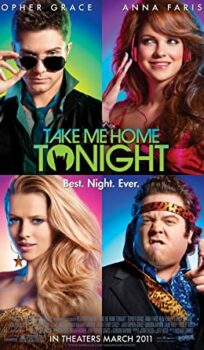