Takers are thieves who live good lives as they play it smart and safe in their heists.

Ghost (Tip ‘T.I’. Harris) a member of the group who got shot and jailed in one of their last heists has a new plan for the gang to execute.  It involved Russian information.  The armored car heist has a few snags but everyone gets away with the money.

While getting away via the subway, Jesse Attica (Chris Brown) gets spotted by the investigator cop, Jack Welles (Matt Dillon).  Jack and his partner, Eddie Hatcher (Jay Hernandez) are in foot pursuit of Jesse who gave the tell-tale sign off to the video camera in the opening bank robbery.  Jesse kills Eddie in a standoff.  Jesse believes that Eddie didn’t even fire.  Eddie whispers to Jack that he got shot during the line of duty.  This would solve his financial worries as his wife, Monica (Zulay Henao) got laid off and Lt. Carver (Steve Harris), of internal affairs, is going to dismiss Eddie for taking money from a crime scene which he did to pay for his ailing son’s medical bills.

There is a shoot out at the rendezvous hotel, Scott (Johnathon Schaech) is counting the money and tells Gordon Jennings AKA G (Idris Elba) and John Rahway (Paul Walker) that after taking care of their financials he’s out.  Ghost double-crosses the group and gets the Russians on them. During the shoot out, A.J. (Hayden Christensen) gets killed along with all the Russians.  Ghost goes to the Attica club and shoots Rachel Jansen (Zoe Saldana) in the head plus cleans out the safe.  The cops have the Attica club surrounded.  The Attica brothers get killed with rifles blaring against a whitewash of cop fire.

Ghost kills Scott and takes the money from the getaway plane.  G, Ghost, and Jack have a standoff on the runway.  Guns go off. G gets it in the stomach and Jack gets one in the leg.  Ghost is about to give G the kill shot when John comes in and kills Ghost.  John and G take the money and G’s drugged-out sister, Naomi (Marianne Jean-Baptiste) off into the black. 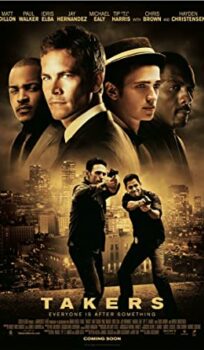